(Reuters) – China’s economy slowed sharply in the fourth quarter due to stringent COVID curbs, dragging down 2022 growth to one of its worst in nearly half a century and raising pressure on policymakers to unveil more stimulus this year.

Gross domestic product (GDP) grew 2.9% in October-December from a year earlier, data from the National Bureau of Statistics (NBS) showed on Tuesday, slower than the third-quarter’s 3.9% pace. The rate still exceeded the second quarter’s 0.4% expansion and market expectations of a 1.8% gain.

On a quarterly basis, GDP came in at 0.0% in the fourth quarter, compared with growth of 3.9% in July-September.

There was muted reaction to the data in Chinese stock markets and the yuan currency. Both have performed strongly this year on hopes for a solid post-COVID recovery.

“We expect a sharp recovery of the Chinese economy, probably towards the end of the first quarter. We see a big increase in GDP beginning in the second quarter. So, we expect to see some increase in the GDP compared to 2022 as a whole.”

“But at the same time, we need to take into account the global economic outlook, where we think that the U.S. and other major economies and Japan will fall into a mild recession. China’s exports are expected to decline, or at least there’s a downside risk for Chinese exports we see at that time.”

“So, China will not be immune from global economic developments. As a result, the Chinese economic growth rate will be below the Chinese government’s target of 5% plus.”

“We can say their COVID-hit economy reached its recent bottom in the October-December quarter and that their economy is on a recovery path although it’s still not solid.”

“The biggest fear we should watch out for is China’s shrinking population, which was highlighted by today’s data. This could weigh on their potential economic growth in the mid-and long-term, and we really need to be paying attention to that.”

“China’s Q4 and full-year 2022 GDP growth rates came in higher than expected. But the quarter-on-quarter growth was at zero. Therefore, the higher-than-expected economic growth rate in the fourth quarter may be due to the impact of inflation.”

“Speaking of stimulus measures, we can only follow the old path this year.”

“Look at the plans that come up at the provincial level, infrastructure plans are the most radical. There are many central and western provinces, like Qinghai, Gansu, Ningxia, Hubei and Hunan, they will build roads, add railways, and some new infrastructure.”

“Real estate is definitely the pillar for this year’s economic growth. Income has already fallen. So, (the stimulus) will focus on the real estate sector this year.”

“The good news is that there are now signs of stabilisation, as policy support doled out towards the end of 2022 is showing up in the relative resilience of infrastructure investment and credit growth. The better news is that we see continued policy accommodation through off-budget fiscal channels in 2023.”

“With incoming data in the next few months skewed by new year-related seasonalities, it remains difficult to gauge with precision the shape of an eventual recovery.”

“Looking through seasonality-related distortions, we think data could start surprising more broadly to the upside from March. Importantly, high frequency indicators on mobility and traffic have showed signs of a tentative rebound, supporting our view of a stronger sequential pick-up in growth from the current quarter.”

“The outcome supports our upward bias to RMB rates and yields. Re-opening shall be seen as a positive to the economy, after initial hiccups surrounding virus cases. Meanwhile, fiscal stimulus leads to supply risk and boost to the economy at the same time, which shall also argue for higher CGB yields.”

“This was well above expectation, we had expected fourth-quarter GDP of 2.2%. December data also came in better across all economic indicators. Overall, this suggests the momentum of recovery will be stronger in the first quarter of this year.”

“I think the recovery is likely to accelerate in the second quarter, as the Chinese population achieves herd immunity against COVID and that will pave the way for further normalisation in activity and also a V-shaped recovery in private consumption.”

“This pent-up demand will be strong and I think the key growth driver for China this year, given that the external outlook is still very cautious at this point due to recession risks in key developed markets.”

“China’s economy likely bottomed in December. This first wave of COVID-19 happened much faster than I expected. For many cities in China, the peak of the first wave (has) likely already passed. High frequency indicators, such as traffic congestion index, rebounded sharply in January. As mobility normalises, consumption is recovering as well.”

“China’s population declined the first time since 1961. The population will likely trend down from here in the coming years. This is very important, with implications for potential growth and domestic demand. China cannot rely on demographic dividend as a structural driver for economic growth.”

“Going forward, demographics will be a headwind. Economic growth will have to depend more on productivity growth, which is driven by government policies.”

“The biggest surprise is the retail sales number, which is really a big beat… I would expect that retail sales could be a jump in the first quarter, and therefore, first-quarter GDP could also rise.”

“But China is not just about COVID. I think we can say that it will be over in 2023, but a new challenge for China will be that external demand will be weak. Monetary policy doesn’t really help because this is an external thing, the only policy left is fiscal and I expect strong support this year on infrastructure.”

“China data came in less worse than expected across the board, reflecting less severe disruptions from the lockdown and massive infection.”

“The less worse-than-expected data did little to boost the RMB exchange rate as attention has shifted to 2023 recovery, especially the data after the Chinese New Year break.”

“Investors may also hold scepticism on the data for December, given the distortion caused by the COVID outbreak and the larger statistical error in data collection in the period.”

“We believe that the data impact will prove to be short-lived and the RMB will be more driven by the USD movement in the near term.”

“In general, this is a positive GDP report, and lays a solid ground for the economy to recover in the coming year. We believe both consumption and investment will see further improvement in the next few quarters, as the reopening has been gaining momentum and the government will add more impetus on infrastructure investment.”

“We see the government will set the growth target at around 5% in the National People’s Congress in March, which looks pretty attainable for now.”

* Analysts polled by Reuters had expected China’s economic growth to slow sharply to 3.0% in 2022, weighed down by widespread COVID lockdowns and infections, but it is likely to rebound to 4.9% in 2023 after strict anti-virus curbs were lifted in December.

* Chinese leaders have pledged to spur the world’s second-largest economy this year while addressing some key drags on growth, notably a severe property sector downturn. Exports are also expected to remain weak as the global economy teeters on the brink of recession, highlighting the importance of boosting domestic demand to drive a recovery in 2023.

* Residents of China are increasingly on the move after the sudden reversal last month of heavy COVID-19 curbs, despite a surge in infections, pointing to a gradual recovery in consumption and economic activity this year. Still, some indicators show activity has not fully recovered to levels of just a few months ago, let alone pre-pandemic levels. 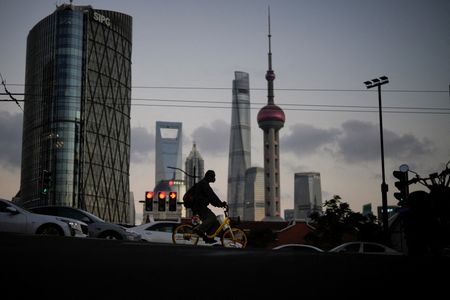