Biden has spent the past few months promoting the merits of both pieces of legislation – the $1.75 trillion “Build Back Better” plan and a separate $1 trillion infrastructure plan.

The two pieces of legislation “should not have any real material impact on inflation”, William Foster, vice president and senior credit officer (Sovereign Risk) at Moody’s Investors Service, told Reuters.

The impact of the spending packages on the fiscal deficit will be rather small because they will be spread over a relatively long time horizon, Foster added.

Senator Joe Manchin, a centrist Democrat, has previously raised inflationary concerns in relation to Biden’s social spending plan, with a report earlier this month suggesting he may delay the passage of the Build Back Better legislation.

“The bills do not add to inflation pressures, as the policies help to lift long-term economic growth via stronger productivity and labor force growth, and thus take the edge off of inflation,” said Mark Zandi, chief economist at Moody’s Analytics, which operates independently from the parent company’s ratings business.

Zandi said the costs of both the infrastructure and social spending legislation were sustainable.

“The bills are largely paid for through higher taxes on multinational corporations and well-to-do households, and more than paid for if the benefit of the added growth and the resulting impact on the government’s fiscal situation are considered”, he said in an interview.

Charles Seville, senior director and Americas sovereigns co-head at Fitch Ratings, said the two pieces of legislation “will neither boost nor quell inflation much in the short-run.”

Government spending will still add less to demand in 2022 than in 2021 and over the longer-run, the social spending legislation could increase labor supply through provisions such as childcare, and productivity, Seville told Reuters.

The House of Representatives passed the $1 trillion infrastructure package earlier this month after the Senate approved it in August. Biden signed the bill into law on Monday.

“The deficit will still narrow in FY 2022 as pandemic relief spending drops out and the economic recovery boosts tax revenues”, Seville said. “But the legislation (Build Back Better) does not sustainably fund all the initiatives, particularly if these are extended and don’t sunset, meaning that they will be funded by greater borrowing.”

(Reporting by Kanishka Singh in Bengaluru; editing by Dan Burns and Lincoln Feast.) 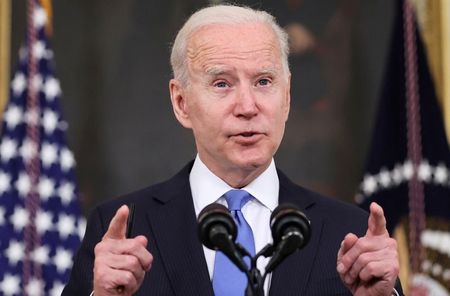 ByteDance says it is ‘bleeding’ due to India bank account freeze, no relief from...