By Mayank Bhardwaj and Rajendra Jadhav

NEW DELHI (Reuters) – India is expected to withdraw sugar export subsidies from the new season beginning October as a sharp rise in global prices makes it easier for Indian mills to sell the sweetener on the world market, a top government official said on Tuesday.

“The government is not considering any subsidy at the moment for next year,” Sudhanshu Pandey, the most senior civil servant at the Ministry of Consumer Affairs, Food and Public Distribution, told Reuters in an interview.

“Under current circumstances, as we see the scenario, there appears to be no need to have the support of the subsidy. If exports can happen on their own, then it’s also better for the global market that no subsidy is provided,” he said.

India, the world’s biggest sugar producer after Brazil, encouraged overseas sales for three years in a row, helping New Delhi emerge as a significant, stable exporter of the commodity.

Rival suppliers have often opposed India’s sugar export subsidies. After protests from Brazil, Australia, and Guatemala, the World Trade Organization (WTO) in 2019 decided to set up panels to rule on complaints against India’s export subsidies for sugar.

The Australian Sugar Milling Council (ASMC), one of the organizations supporting the WTO action, said last week that there was “widespread concern amongst the world’s sugar producing countries that the Indian government might be contemplating further contentious export subsidies”.

“Green Pool found that the subsidies and global oversupply had forced down the price of sugar on global markets by an average two cents a pound over the four years,” said ASMC Director David Rynne.

India has maintained that its sugar export subsidies do not violate WTO rules.

“The demand for Indian sugar is going to be higher, so (global) prices are expected to firm up. There may be no requirement of subsidy,” Pandey said.

On Tuesday, benchmark raw sugar prices in New York climbed to a fresh 4-1/2-year high, supported by fund buying against the backdrop of tightening supplies.

Brazil’s 2021/22 center-south (CS) sugar production is forecast to fall to 32.5 million tonnes from a June forecast of 34.1 million tonnes due to drought and frosts hurting the sugarcane crop, according to food trader Czarnikow.

Cashing in on rising sugar prices, Indian traders for the first time have signed export contracts five months ahead of shipments as a likely drop in Brazil’s production prompted buyers to secure supplies from India in advance.

“Overseas demand is very good as Brazil’s production is being revised down. We can export 6 million tonnes in the next season,” said Prakash Naiknavare, managing director of the National Federation of Cooperative Sugar Factories Ltd.

In the current year to Sept. 30, India is set to export a record 7.1 million tonnes of sugar, thanks to the subsidies to boost overseas sales.

For the past many years, higher sugar production has hammered local prices, hitting mills’ financial health and making it hard for sugar barons to make timely payments to cane farmers. 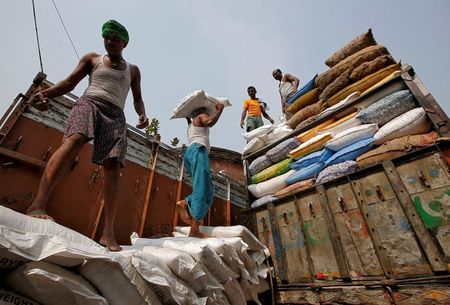 Warren Buffett resigns from Gates Foundation, has donated half his fortune

U.S. chip funding could result in seven to 10 new factories...

Google’s antitrust legal woes far from over if Biden wins