MARACAY, Venezuela (Reuters) -Venezuela’s first diesel imports since November arrived this week aboard the tanker Bueno, carrying almost 500,000 barrels of fuel desperately needed by farmers and truckers in the sanction-hit country, according to a shipping document and three sources.

It was not immediately clear who provided the fuel.

The U.S. Treasury Department declined to comment. A spokesperson for the State Department said U.S. policy on diesel swaps linked to Venezuela has not changed. “Those that participate in such transactions remain at risk of exposure to our sanctions,” the person said.

Until the last quarter of 2020, when U.S. officials ordered companies involved to halt diesel supplies as part of sanctions aimed at ousting President Nicolas Maduro, most imports of the fuel arrived in the OPEC-member nation as swaps for crude with PDVSA’s customers.

Diesel has since become the second motor fuel rationed in Venezuela, along with gasoline, forcing drivers to line up for hours to fill their tanks, a difficult task for farmers and companies using trucks for distribution of food and medicine.

The Bueno, a Djibouti-flagged tanker, arrived on Sunday near Venezuela’s Amuay port.

It finished discharging a first parcel of high-sulfur diesel on Wednesday via ship-to-ship transfer there, and it moved on Thursday to the terminal to unload its remaining content, which PDVSA plans to process at its Paraguana Refining Center to produce motor diesel, according to the maritime document, a photo of the vessel seen by Reuters and three sources with knowledge of the shipment.

The cargo was inspected by PDVSA officials on Monday, one of the sources said.

The vessel departed from Fujairah in the United Arab Emirates in April and passed the Suez Canal in early May before turning off its transponder and signaling the Lome port in Togo as its destination, Refinitiv Eikon data showed.

PDVSA did not reply to a request for comment. Turkey-based Expanse Ship Management, which according to maritime database Equasis in April became the owner and operator of the tanker, could not be reached for comment.

Venezuela’s humanitarian crisis, emerging after years of hyperinflation and recession, has recently been exacerbated by the lack of gasoline, diesel and cooking gas.

“Any (political) negotiation in Venezuela should prioritize resolving the humanitarian emergency,” economist Francisco Rodriguez, who has urged Washington to authorize fuel supply to the nation, said on Twitter on Thursday.

Critics and many farmers say U.S. sanctions are not the root cause of the scarcity. PDVSA’s refining network is operating at a fraction of its capacity. Shortly after Venezuela received its last diesel cargo in November, the agriculture ministry began to ration the fuel.

(Reporting by Mircely Guanipa in Maracay, Venezuela and Marianna Parraga in Mexico City; additional reporting by Luc Cohen in Caracas, Daphne Psaledakis in Washington and Can Sezer in Istanbul; Editing by Lisa Shumaker) 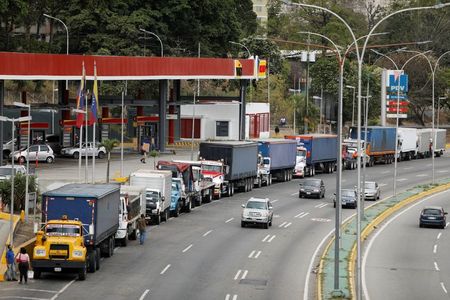 Ryanair to be opportunistic in financing MAX jets, says CFO