OTTAWA (Reuters) – Canada would respond “appropriately” to proposed U.S. electric vehicle tax credits for American-built vehicles, which it says would harm workers on both sides of the border, Innovation and Industry Minister Francois-Philippe Champagne said on Thursday.

“They understand that legislation like that would generate a response on the Canadian side,” Champagne told Reuters in a telephone interview from Washington. “We have always responded appropriately to these types of legislation.”

The House of Representatives could vote as early as Friday on a social spending and climate bill that includes a $4,500 incentive for union-made vehicles and $500 for U.S.-made batteries. Vehicles would have to be made in the United States starting in 2027 to qualify for any of the $12,500 credit.

Champagne said the tariffs would run against the rules of the North American trade agreement – the USMCA – and World Trade Organization.

They “would be really contrary to the spirit… of what we have been trying to achieve with our American colleagues,” which is a joint effort to pivot toward greener technologies to fight climate change, Champagne said.

“My message to (U.S. officials) is that a decision like that… would impact jobs on both sides of the border, and at a time where we need to work closely together with respect to critical minerals with respect to the battery ecosystem,” Champagne said.

“The response has been an understanding of the impact that the proposed legislation could have,” he added.

Canada’s Automotive Parts Manufacturers’ Association has said that the credits would hurt Canadian parts makers that employ some 43,000 American workers in 18 states.

Canada’s industrial heartland of Ontario is geographically close to U.S. automakers in Michigan and Ohio, and General Motors Co, Ford Motor Co and Stellantis NV have all announced plans to make electric vehicles (EVs) at factories in the province.

“As close partners with deeply integrated supply chains, particularly in the automotive sector, Canada and the United States must work together to find a mutually beneficial solution,” she said in a statement about their discussion.

When former U.S. President Donald Trump imposed tariffs on Canadian goods, including aluminum, Canada retaliated with its own duties. The proposed tax credits have faced opposition from non-U.S. automakers and governments.

Canada is rich in key materials for EV battery production – including lithium, graphite, cobalt and nickel – and is trying to woo battery makers – including Germany’s BASF SE -to safeguard the future of its manufacturing in Ontario as the world seeks to cut emissions.

Champagne, who is flying to Mexico City to speak with his counterpart there later on Thursday, will visit Europe next week and will meet with battery maker executives, the minister said.

“I’ve been in touch with the major players in the sector for months now,” he said. “Canada certainly has distinctive advantages for them to be locating in Canada to serve the North American auto market.” 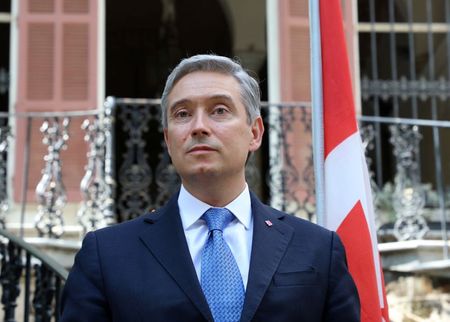