By Aram Roston and Lisa Barrington

WASHINGTON (Reuters) – Erik Prince, the founder of controversial private military firm Blackwater and a supporter of former President Donald Trump, jumped into the COVID-19 business late last year with a deal to distribute an experimental vaccine should it be approved, according to three people familiar with the arrangement and business records seen by Reuters.

The COVID-19 vaccine, known as UB-612, is being developed by a privately-held U.S. firm called COVAXX.

The company has said the vaccine shows promise in protecting people against coronavirus, based on a small study of 60 patients in Taiwan. It hasn’t provided data on safety and efficacy from large clinical trials, information that is usually required before a vaccine is authorized for public use.

COVAXX is unrelated to the similar-sounding but better-known “COVAX,” a global vaccine distribution program backed by the World Health Organization.

Since the start of the pandemic in 2020, the COVAXX vaccine has attracted some big-name backers, including endorsements from entrepreneur Peter Diamandis, who co-founded the company, and motivational speaker Tony Robbins. In March, the company raised $1.35 billion in a private placement, according to U.S. securities filings.

Prince’s involvement in vaccine distribution, which has not been previously reported, sheds new light on the race to profit from the uncertainties of the pandemic. Vaccine supply deals have often been forged through direct government ties to drugmakers, global health organizations or diplomatic channels.

Reuters couldn’t determine how Prince first became associated with COVAXX, or whether he has brokered any vaccine supply deals.

Prince did not respond to questions for this story. A source close to Prince said that “Erik has been helping a vaccine manufacturer set up distribution,” but declined to give details.

Diane Murphy, a public relations consultant for Vaxxinity Inc, which owns COVAXX, declined to answer questions related to Prince. In a statement to Reuters, she said that the company has “accepted introductions from a variety of private, public and non-profit intermediaries, both formally and informally.”

Prince has made headlines for years, first as chief executive of Blackwater, whose security guards fatally shot more than a dozen Iraqi civilians in Baghdad in 2007. After he left Blackwater, Prince pushed to privatize the war in Afghanistan by having contractors fight instead of the U.S. military and became embroiled in an investigation into possible collusion between the Trump election campaign and the Russian government.

Prince sought to recruit a close associate, the late Paul Behrends, a former Republican congressional staffer and lobbyist who represented Blackwater for over two years, to help in the COVAXX project.

In a series of text messages to Behrends, Prince described the potential for profit from selling the vaccines.

“There’s room for a couple dollars per dose in commissions,” Prince said in a Nov. 9 text to Behrends. He shared with Behrends a “Letter of Authorization” on COVAXX letterhead signed by senior vice president Brandon Schurter as proof of his distribution deal. Schurter did not respond to requests for comment.

The October 2020 letter said that an entity called Windward Capital, with an address in Abu Dhabi, was authorized to “assist in the process of creating distribution networks.” Reuters could not find a Windward Capital registered in Abu Dhabi. But a company called Windward Holdings that handles “professional, scientific and technical activities” is listed there, with Erik Prince the sole named shareholder.

Prince is also the managing member of a corporate entity called Windward Wyoming LLC, which says it has a “global distribution” deal with COVAXX, according to records of non-public business agreements seen by Reuters. The company was formed in October 2020, public incorporation records in Wyoming show.

Lawyers and other officials affiliated with the various Windward entities did not respond to requests for comment.

Prince and Behrends were negotiating how to carve up prospective sales territories by country, said Barry Angeline, a friend of Behrends. But their possible collaboration was cut short in December, when Behrends died.

Vaxxinity consultant Murphy told Reuters the company has a “focus on the developing market” – including the many countries that have been unable to acquire the shots made by global drugmakers and stockpiled by wealthier nations.

COVAXX was formed in early 2020 as a subsidiary of United Biomedical Inc (UBI), a maker of diagnostic tests and veterinary vaccines, to address the coronavirus pandemic. In April, the company announced it was being consolidated into a new holding corporation called Vaxxinity.

COVAXX’s backers were quick to publicize the vaccine’s potential beginning in July, based on early tests in animals, and before the first clinical trials in people began in Taiwan.

Diamandis, who is listed as a co-founder of Vaxxinity, wrote in a July 30 post on his personal blog that the vaccine was safe for patients and likely effective in the elderly. He told Reuters he made it clear in those posts that his assertions were based on previous trial results of other vaccines developed by the company.

A few weeks later, Robbins, the self-help coach, held a webinar promoting COVAXX titled “The most powerful vaccine you’ve never heard of.” Robbins said in the video that he was one of the company owners. “I’ve invested in the company, so everyone knows. Because I’ve been blown away by seeing these results,” he said.

Robbins “remains an investor,” his spokeswoman Jennifer Connelly said in a statement to Reuters. She added, “Mr. Robbins is not involved in the management or daily operations.”

In October, COVAXX and shipping giant Maersk announced a partnership to provide global transport of the vaccine as soon as it becomes available. The Maersk official quoted in the release, Rob Townley, said the company recognized the urgent need to safely deliver COVID-19 vaccines worldwide.

Data on how well the vaccine works is still pending. In an email to Reuters, Vaxxinity’s Murphy said the company had completed the Phase 1 trial of 60 volunteers aged 20 to 55 in Taiwan, and is conducting a new study of 3,800 people there, including teens and elderly participants. The company plans larger trials in Brazil and India later this year.

(Reporting by Aram Roston in Washington and Lisa Barrington in Abu Dhabi; Editing by Michele Gershberg) 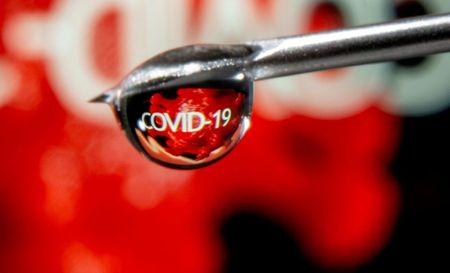 Explainer: Do claims against Musk raise a legal issue for his...