By Anisha Sircar and Shreyashi Sanyal

(Reuters) -European stocks ended in the red on Friday, clocking their first weekly decline in seven weeks on concerns over the economic damage from fresh COVID-19 lockdowns in the region that hammered cyclical sectors such as banks and automakers.

The pan-European STOXX 600 index fell 0.3% after hovering near record highs earlier in the session. The index ended the week 0.1% lower.

It lost ground after news that Austria will become the first country in western Europe to reimpose a full COVID-19 lockdown this autumn to tackle a new wave of infections.

Germany’s Health Minister Jens Spahn said the coronavirus situation in the country was so grave that a lockdown, including for people who have been vaccinated, cannot be ruled out.

“Any thoughts that the vaccines would offer a way to a more normal Christmas period appear to have gone up in smoke for now, in Europe at least, although there is a nagging fear this could ripple out across the region,” said Michael Hewson, chief market analyst at CMC Markets.

Frankfurt shares fell 0.4%, while sectors more exposed to economic cycles such as banks, automakers and travel & leisure fell between 1.5% and 2.2%.

South European markets, including those in Spain and Italy, fell about 1.5% each.

European stocks have hit a series of record highs this month as a stronger-than-expected earnings season helped investors look past concerns about rising inflationary pressures.

European Central Bank President Christine Lagarde said inflation in the euro zone will fade so the ECB should not tighten policy as it could choke off the recovery, and hinted at continued bond purchases next year.

The ECB is due to decide on the future of its bond-purchase programmes at its Dec. 16 policy meeting.

Irish airline Ryanair dropped 2.3% after announcing its intention to delist from the London Stock Exchange, citing costs related to retaining an additional listing.

French luxury group Hermes gained 5.2%, after jumping more than 6% in the previous session, on market talks that it may be added to the Eurostoxx 50 index during a December review. 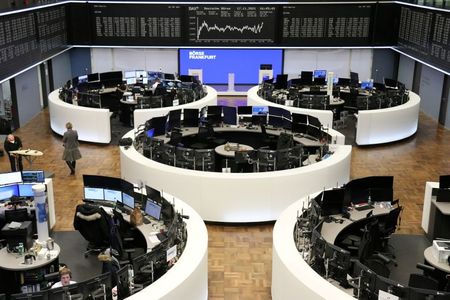 Saudi bourse operator Tadawul sets price range for up to $1...