(Reuters) -European shares hit a near nine-month high on Monday, albeit in light trading due to a U.S. holiday, with real estate and retail stocks helping offset losses in commodity-linked sectors.

The pan-European STOXX 600 closed up 0.5% at 454.6 – its highest level since April 2022 – as global equities continued to build on a new year rally spurred by hopes of a rebound in China’s economy and an easing of prices pressures in the United States and Europe.

The STOXX 600 index has gained 6.6% since the start of the year, as warmer weather added to hopes of an easing in the European energy crisis brought on by the Russia-Ukraine war.

Germany’s DAX and France’s CAC 40 climbed 0.3% each and Italy’s FTSE MIB gained 0.5%, with all three closing at a near one-year high.

“Having been pessimistic on the outlook for much of 2022 and while still acknowledging the risks to markets, we are somewhat more constructive on the outlook for 2023, and favour increasing weightings in certain cyclical sectors,” Edward Stanford, head of European equity strategy told clients, adding that valuations in Europe were “unarguably cheap”.

The World Economic Forum’s annual winter shindig in Davos kicked off earlier in the day following a three-year hiatus, with investors keeping an eye on commentary from several central bank policymakers and industry leaders.

Meanwhile, Britain and the European Union agreed to press on with talks to try to resolve a post-Brexit trade row over Northern Ireland, but London said gaps remained between the two sides.

In company news, Temenos jumped 8.9% after Chief Executive Officer Max Chuard quit the Swiss financial software company, which has been under pressure from activist shareholders.

Marks & Spencer gained 2.9% after the British clothing and food retailer said it planned to open 20 new stores in its 2023-24 financial year as part of a 480 million pound ($587 million) investment in its store estate. 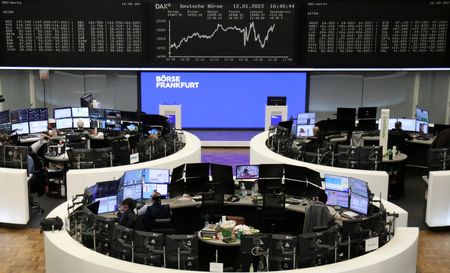