(Reuters) -European shares reversed early losses on Tuesday to close at a fresh nine-month high after a report said the European Central Bank’s policymakers were considering a slower pace of interest rate hikes.

Markets had been under pressure for most of the day after data showed China posted its weakest annual economic growth in 2022 in nearly half a century and Wall Street bank Goldman Sachs reported quarterly profit below estimates.

The pan-European STOXX 600 closed up 0.4%, its strongest level since April 22, with miners and food and beverage stocks leading gains.

While the 50 basis-point step in February ECB President Christine Lagarde signalled remains likely, the prospect of a smaller 25-point increase at the following meeting in March is gaining support, Bloomberg News reported.

He added that “…it does make sense for the ECB to be at least assessing the suitability of Lagarde’s message. Since then we have seen energy prices – most importantly gas – fall back, and in turn inflationary pressures have come in softer than expected”.

The benchmark pan-European Stoxx index has gained nearly 7% in an upbeat start to the year, spurred by hopes of a rebound in China’s economy, easing price pressures and growing expectations of a milder-than-expected recession.

However, Germany’ BDI industry association warned that the economy is expected to contract by 0.3% this year as the energy crisis would continue to weigh on the industry in Europe’s largest economy.

LVMH rose 0.6% to hit an all-time high, giving the luxury goods group a market capitalisation of 400 billion euros ($434 billion) for the first time and cementing its lead as Europe’s most valuable company.

“So the reopening story in China and that accumulated savings are probably quite a large part of that.”

Ocado Group fell 9.3% after its online joint venture Ocado Retail warned it would not return to profit until the second half of its financial year as even its typically more affluent shoppers feel the squeeze from higher inflation and energy bills. 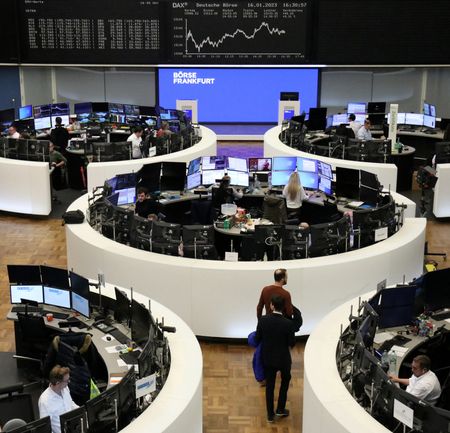 Netflix does not plan to buy a movie theater chain, co-CEO says

Spain’s Sabadell kicks off new round of layoffs in Spain –...