By Allison Lampert and Inti Landauro

On Thursday, some 1,000 SAS pilots in Denmark, Norway and Sweden said they could go on strike from late June, even as workers at France’s Charles de Gaulle airport walked off the job, with a quarter of flights cancelled.

Airlines, battered by a slump in travel during the pandemic, have been counting on a strong summer, with fares rising to offset higher fuel costs and pilots and cabin crews making a case for higher pay due to inflation.

While budget carrier Norwegian Air reached a wage deal with the Norwegian union representing pilots for 2022 and 2023, crews from three budget carriers including Ryanair, walked off the job on Wednesday.

Airport managers in Europe and Canada are struggling to quickly recruit and process new hires, even as the rebound in air travel from the pandemic-induced slump leads to cancelled flights and hours-long lines.

On Wednesday evening, German flag carrier Lufthansa and its subsidiary Eurowings said they were scrapping over 1,000 flights in July, or 5% of their planned weekend capacity, due to staff shortages amid the busy vacation period.

The head of airline trade group the International Air Transport Association (IATA) has said heavy congestion also occurred before the pandemic and is now limited to certain airports, aggravated by delays to get security badges required for newly hired staff.

Although airports in the United States have largely avoided such heavy congestion, a staffing crunch has forced airlines to cancel flights and trim summer schedules.

Alaska Air Group Inc last month was forced to cancel 4% of its flights because of staffing woes. Delta Air Lines, which cancelled about 700 flights over the four-day Memorial Day holiday, plans to cut flights through August.

Canada’s busiest airport is allowing some staff who have yet to obtain their badges to work temporarily under supervision by vetted employees, said Tori Gass, a spokeswoman for the Greater Toronto Airports Authority.

The temporary pass was introduced at Toronto Pearson International Airport in response to the large volume of appointments for restricted area identity cards (RAIC), Gass said. It takes roughly 45 days to get the cards.

Transport Canada said it received 13,722 applications nationally for clearances required for such employees as airport ramp agents or baggage handlers in the first quarter of 2022, up from 5,968 requests during the same period in 2021.

Pearson is wrestling with planes stuck at gates and hours-long security lines due to staffing shortages.

Canadian Transport Minister Omar Alghabra on Wednesday said he was working with partners to bring in more screening officers.

The country’s largest carrier Air Canada cancelled almost 10% of flights from the airport during the first week of June, according to data from Cirium, an aviation analytics company. Air Canada said its overall flight completion remains high and a combination of factors, including air traffic control limitations have “forced airlines to cancel flights.”

In Europe, Dublin and Heathrow airports are recruiting screeners, while Schiphol Airport in Amsterdam is raising wages for staff.

Spain on Tuesday announced the hiring of 500 additional police to staff passport controls at busy airports and tourist destinations including Madrid.

Spain’s interior minister attributed reports of congestion at border controls to multiple flights arriving at the same time. But CEHAT, the country’s largest business group for hotels and lodging, said officials should have prepared for the congestion, knowing that free travel of British citizens to Spain was ending due to Brexit.

“This situation should not have caught us off guard,” CEHAT president Jorge Marichal said in a statement on Wednesday.

(Reporting by Allison Lampert in Montreal and Inti Landauro in Madrid. Additional reporting by Rajesh Kumar Singh in Chicago, Steve Scherer in Ottawa and Zuzanna Szymanska in Berlin; Editing by Howard Goller) 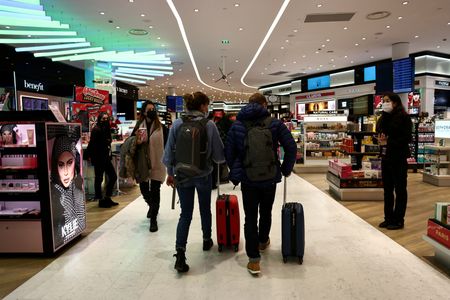