BRUSSELS (Reuters) -Italy’s plan to set up a successor to its loss-making flag carrier Alitalia cleared a key hurdle on Wednesday after the European Commission said it had reached an understanding with Rome on parameters to ensure the new airline is independent from the old one.

Long-running discussions between the two sides have foundered amid disagreement over its successor ceding half of Alitalia’s slots at Milan Linate airport, the old brand and the loyalty programme.

EU competition enforcers want Rome to make sure that there is no economic continuity between Alitalia and its successor Italia Trasporto Aereo (ITA), otherwise the latter would be liable for the former’s billions of euros in state aid received in recent years.

The possible deal between the Commission and Rome on Wednesday came after a meeting between European Competition Commissioner Margrethe Vestager and Italian Economic Development Minister Giancarlo Giorgetti and Economy Minister Daniele Franco.

“The Commission and the Italian authorities have reached a common understanding on the key parameters to ensure economic discontinuity between ITA and Alitalia,” a Commission spokeswoman said.

She said talks with Rome would now continue at technical level while an ongoing investigation into the 1.3 billion euros ($1.59 billion) of state aid granted to Alitalia was in the final stage.

Giorgetti said Rome now needed to work to ensure that new Alitalia was ready to operate “as soon as possible”, adding it was reasonable to expect a start in August.

As part of the understanding, less than half of Alitalia’s fleet will be transferred to ITA, as well as less then half of its aviation personnel, with new contracts, a person familiar with the matter said. The source added that ITA would retain a number of slots at Milan Linate airport depending on how many planes it gets.

The rest of Alitalia’s assets, including its brand, will be tendered off, where ITA will be allowed to take part together with other interested parties, the person said.

ITA will not be allowed to take over Alitalia’s loyalty programme nor its client base, it said. 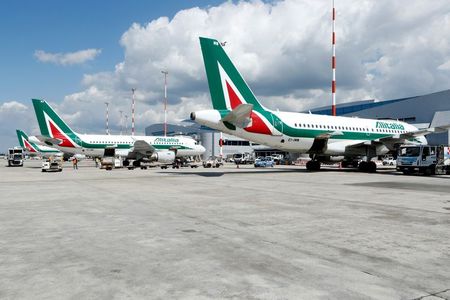 Analysis-Some U.S. firms wait to issue bonds in a bet rates will come down

SWIFT says it preparing to comply with curbs on Russian banks