NUR-SULTAN (Reuters) -The European Bank for Reconstruction and Development (EBRD) may help Kazakhstan boost the capital of the local subsidiary of Russia’s Sberbank if the Central Asian nation buys it, EBRD President Odile Renaud-Basso said.

Renaud-Basso said the EBRD was aware of talks between Sberbank, which has been hit by Western sanctions, and Kazakh state holding company Baiterek, but had no plans to take part in the possible initial sale of the unit to Kazakhstan.

She made the comments to reporters on the sidelines of a foreign investor conference in Kazakhstan.

After Russia sent troops into Ukraine, the United States imposed sanctions in April on Sberbank, which has more than 110 million customers and holds a third of Russia’s total banking assets. The European Union agreed measures last month.

Sberbank’s Kazakh subsidiary was until recently the second-biggest bank by assets in the former Soviet republic that has close economic and political ties with Moscow.

Sources told Reuters in May that Sberbank expected the buyer of the Kazakh subsidiary to ensure it repays those loans, whose value is now much greater than that of the Kazakh unit.

The EBRD said separately that Renaud-Basso also urged Kazakh officials, including President Kassym-Jomart Tokayev, to speed up the adoption of a decarbonisation programme and launch 2 gigawatts of renewable energy capacity by the end of 2025.

The bank signed a memorandum with state energy firm KazMunayGaz on plans to reduce the company’s carbon footprint, including through carbon capture and hydrogen production projects.

Another project in which Kazakhstan invited the bank to participate is the expansion of the Dostyk railroad crossing on its border with China which Kazakhstan hopes will become a part of a trans-Caspian shipping route bypassing Russia. 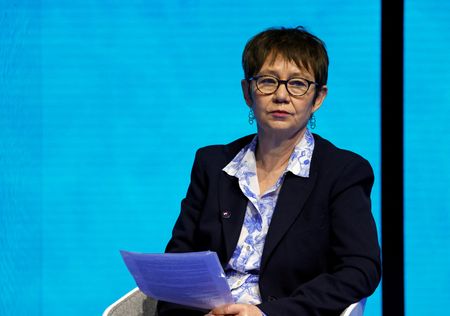