WASHINGTON (Reuters) – U.S. retail sales dropped by the most in 10 months in December, likely the result of Americans starting their holiday shopping in October to avoid empty shelves at stores.

Economists cautioned against reading the unexpected plunge in retail sales last month reported by the Commerce Department on Friday as a sign of weakness. Consumer spending remains underpinned by huge savings, rising wages as companies scramble for scarce workers as well as soaring household wealth.

Still, the report and news of an unexpected decline in production at factories in December suggested the economy lost momentum at the end of 2021. That trend likely persisted into January amid spiraling COVID-19 infections, driven by the Omicron variant, which have disrupted businesses and schooling.

“It is clear that most shoppers heeded the advice to get holiday shopping done early and that, combined with a massive surge in goods spending earlier in the year, conspired to pull sales sharply lower to end the year,” said Tim Quinlan, a senior economist at Wells Fargo in Charlotte, North Carolina.

Retail sales fell 1.9% last month, the largest decline since February 2021, after rising 0.2% in November. Economists polled by Reuters had forecast retail sales unchanged. Estimates ranged from as low as a drop of 2.0% to as high as a 0.8% increase.

Sales could weaken further in January as Omicron limits consumer traffic to places like restaurants and bars, though some economists expect goods spending to increase as people stay at home. Retail sales are 19.2% above their pre-pandemic level. Holiday sales surged 14.1% to a record $886.7 billion in 2021, according to the National Retail Federation.

Bottlenecks in the supply chains caused by the pandemic have led to shortages of goods. The pulling forward of sales from December also likely impacted the so-called seasonal factor, the model that the government uses to strip out seasonal fluctuations from the data.

“We do not, therefore, believe that December was a weakening demand story or more cautious behavior by consumers,” said Conrad DeQuadros, senior economic advisor at Brean Capital in New York.

The online sales category was hardest hit by the drag from the seasonal factor, plunging 8.7%. Receipts at auto dealerships slipped 0.4%. Automobiles remain scarce because of a global semiconductor shortage.

Motor vehicles could remain in short supply for while. A separate report from the Federal Reserve on Friday showed a 1.3% drop in production at motor vehicle plants helped to pull down manufacturing output 0.3% in December.

Production at factories increased 0.6% in November. Economists had expected output to rise 0.5%.

The Fed is still expected to start raising interest rates in March, against the backdrop of high inflation.

“We do not think today’s reading will have a significant impact on the Fed’s decision to liftoff rates, likely in March, which will depend more heavily on inflation than activity data,” said Andrew Hollenhorst, chief economist at Citigroup in New York. “The seasonal adjustment factor turns highly positive in January suggesting that online sales and overall retail sales will bounce back strongly.”

Sales at electronics and appliance stores dropped 2.9%. Receipts at service stations fell 0.7% as gasoline prices retreated from higher levels seen in the prior months. Sales at food and beverage stores fell 0.5%. Sales at clothing stores declined 3.1%. There were also decreases is sales at sporting goods, hobby, musical instrument and book stores.

Excluding automobiles, gasoline, building materials and food services, retail sales plunged 3.1%. That was also the biggest drop since last February. Data for November was revised lower to show these so-called core retail sales falling 0.5% instead of dipping 0.1% as previously reported.

December’s weakness puts consumer spending on a lower growth trajectory heading into the first quarter. Concerns about inflation could also restrain spending. Consumer sentiment fell to the second-lowest level in a decade in early January, a survey from the University of Michigan showed.

Goldman Sachs trimmed its growth estimate by half-a-percentage point to a 6.5% annualized rate. The economy grew at a 2.3% pace in the third quarter. Growth last year is expected to have been the strongest since 1984.

“Consumer spending will remain the cornerstone of economic growth this year but the near-term path will be choppy amid surging Omicron cases and elevated inflation,” said Lydia Boussour, lead U.S. economist at Oxford Economics in New York. “Overall, the combination of strong labor income growth, elevated excess savings and healthy balance sheets will support above-trend consumption growth this year of 4%.” 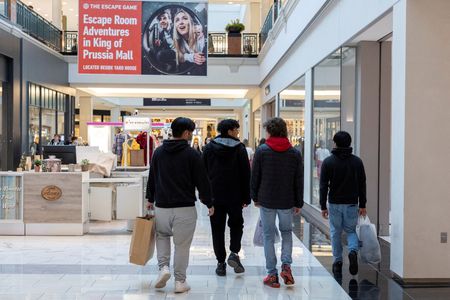 Novartis’ bid to boost Entresto sales beyond $5 billion gets FDA...