NEW YORK (Reuters) -The dollar climbed to a near four-week high against a basket of currencies on Friday, after data showed U.S. consumer prices accelerated in May, strengthening expectations the Federal Reserve may have to continue with interest rate hikes through September to combat inflation.

In the 12 months through May, the CPI increased 8.6% after rising 8.3% in April. Economists had hoped that the annual CPI rate peaked in April.

The inflation report was published ahead of an anticipated second 50 basis points rate hike from the Fed next Wednesday. The U.S. central bank is expected to raise its policy interest rate by an additional half a percentage point in July. It has hiked the overnight rate by 75 basis points since March.

“Inflation is now at a 40-year high with little evidence that it has peaked,” said John Doyle, vice president of dealing and trading at Monex USA.

“Stocks are extending losses on the expectation the Fed could find the scope to speed up rate hikes. The greenback is gaining on policy divergence and risk-off trading,” Doyle said.

The U.S. Dollar Currency Index, which tracks the greenback against six other major currencies, was 0.8% higher at 104.16, its highest since May 17, and within sight of 105.01, the two-decade high touched in mid-May.

For the week, the index was up nearly 2%, its best weekly performance in 6 weeks.

The dollar was up 0.79% against the Swiss franc at 0.9881 francs after the U.S. Treasury Department on Friday said Switzerland continued to exceed its thresholds for possible currency manipulation under a 2015 U.S. trade law, but refrained from branding it a currency manipulator.

With the U.S. inflation data knocking investors’ risk appetite, the risk-sensitive Australian dollar reversed direction to trade down 0.58% on the day.

Sterling fell 1.5% to $1.2315 and was set for a second consecutive week of declines as Britain’s gloomy economic outlook left investors on edge.

In cryptocurrencies, bitcoin slipped 3.7% to $28,984.33, as the world’s largest digital currency by market value continued to struggle to overcome a bout of selling pressure that has taken it below the $30,000 level in recent sessions. 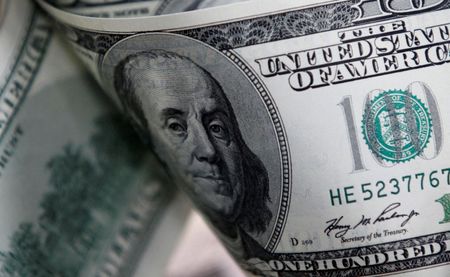 U.S. should consider ‘safe harbor’ from Russia sanctions for some companies – trade group