NEW YORK (Reuters) – Dogecoin, a meme-based cryptocurrency popular among retail investors, surged on Wednesday, benefiting from news that digital asset exchange Coinbase will make the crypto unit available to its users on its trading platform.

Coinbase said on Tuesday it will immediately accept inbound transfers of dogecoin Coinbase Pro, a trading venue for professional traders.

Dogecoin rose 31% on Wednesday to $0.41 in the wake of the Coinbase news. That pushed the cryptocurrency’s market capitalization to $54 billion, making it the sixth-largest token, according to data and market tracker CoinGecko.com.

But this “dogecoin bounce comes during a period where the cryptoverse is seeing a consolidation of positions, so we should not be surprised if this recent surge fizzles or if it makes another attempt at the moon,” he added.

Dogecoin lost more than a third of its price after Musk, a big supporter of the currency, called it a “hustle” during his guest-host spot on the Saturday Night Live.

The token’s rise came during a surge in online trading of stocks and crypto by retail investors, stuck at home with extra cash because of the COVID-19 pandemic. The coin has not seen much growth in usage for payments or in commerce.

A boom in usage of online trading apps like Robinhood also fueled the social-media driven rally in GameStop Corp stock this year, which pitted retail investors against hedge funds. 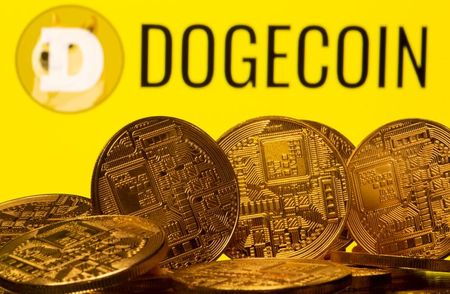 Citi CFO Mason warns of mixed year for bank even as...