The bank’s annual shareholder meeting, held online due to the coronavirus pandemic, took place in a more relaxed atmosphere than in recent years, a reflection of the lender’s return to profit and rising share price.

“But we have come a long way. We still have work to do, but we have already achieved so much,” he said.

Asked about possible mergers and acquisitions, Sewing said: “Our main focus is and remains the successful execution of our transformation by 2022”.

Deutsche posted a net profit for the first quarter, its strongest result for seven years, driven by its investment bank which outperformed major U.S. rivals.

Its shares are up more than 130% from last year’s record lows.

“There are no more question marks hanging over the stability of our bank, while many – but not all – of the problems of recent years have been remedied,” said Chairman Paul Achleitner.

Alexandra Annecke, a fund manager with Union Investment, said Deutsche had become an exciting turnaround story and this year’s meeting for once wasn’t taking place in a crisis.

“Shareholders have the worse behind us,” she said. “We finally see light at the end of the tunnel.”

Ratings agencies have become more optimistic about the bank. Moody’s recently put Deutsche under review for a possible upgrade.

Despite a spate of good news, however, the bank is still having problems with money laundering controls.

“We must improve our transaction monitoring,” Achleitner said. 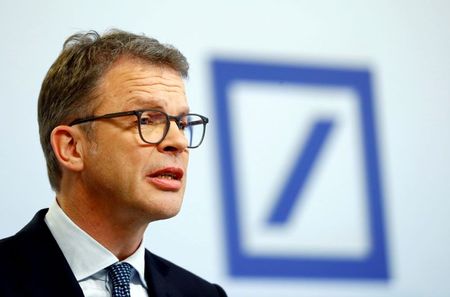 Toyota exec: Not everyone should drive a battery electric vehicle