The company said surging COVID-19 cases will likely result in losses in January and February, resulting in a loss for the quarter through March. But it expects the recovery in travel demand to resume around late February, putting the carrier in a position to generate profit in the June, September and December quarters.

Overall, it expects a “meaningful” profit in 2022 and backed its target to exceed the company’s pre-pandemic financial performance by 2024.

“If we could pick a period of time for an Omicron variant to surge, we would probably pick this time of year,” Delta’s President Glen Hauenstein told investors on a call.

Air travel demand tends to be the weakest in the first quarter.

The company said bookings for international travel were down, but Delta believes the transatlantic market will have a strong spring and summer once Omicron-driven border restrictions are lifted.

Chief Executive Ed Bastian expects business travel to pick up by the middle of February.

The Atlanta-based carrier’s adjusted profit for the quarter through December came in at 22 cents a share, beating analysts’ average estimate of 14 cents per share, according to IBES data from Refinitiv, marking the second profitable quarter in a row.

The company estimates revenue in the March quarter will recover to 72% to 76% of 2019 levels. It expects to restore 83% to 85% of pre-pandemic capacity in the current quarter.

Its capital expenditure in the quarter is projected to increase by about 69% from the December quarter to $1.6 billion.

A surge in COVID-19 cases, driven by the Omicron variant, has caused havoc for the airline industry. An increase in daily employee sick calls as well as a series of winter storms have led to mass cancellations of flights.

Since Christmas Eve, U.S. airlines have canceled more than 31,300 flights, or about 7% of the scheduled total, according to flight-tracking service FlightAware.

Delta had to cancel more than 2,000 flights. The airline, however, said its operation has stabilized over the past week, with cancellations declining to less than 20 flights a day.

Yet, operational disruptions are projected to add to cost pressures in the current quarter.

Bastian said 8,000 Delta employees have contracted the virus since Omicron became the dominant variant. The case counts, however, have been declining over the last week, he said.

“We have more and more people coming back into the operation than new people getting impacted by the virus,” he told Reuters in an interview.

Bastian said the U.S. government shortening quarantine guidelines to five days helped get people out of isolation and back to work. He said the company is encouraging its employees at day five to get tested and not to come back until they are confident they are well. 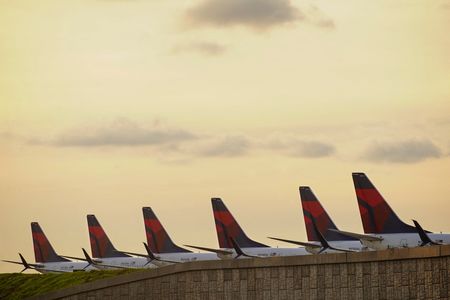 Move over Apple, Microsoft now the world’s most valuable company

Investment banks in Australia shop for talent after raid by startups