Below are the events as they unfolded over the course of four months since the company and the labor union began negotiations:

Deere and the UAW start talks on a new labor agreement covering about 10,100 production and maintenance employees at 12 Deere facilities in Iowa, Illinois and Kansas.

After six weeks of negotiations, both sides reach a tentative pact on a new six-year labor agreement. Members at Deere locations were set to review the terms on Oct. 10.

About 90% of workers vote against the 6-year labor contract. A strike deadline is set at the end of Oct. 13.

Deere workers begin a strike. The company says it does not have an estimate of when employees affected by the strike would resume activities or the timing for completion of talks with the UAW.

An Iowa judge grants the company a temporary injunction against striking union members who trespass on its Davenport Works facility or block its entrance and exits.

The judge limits the number of picketers to no more than four at each gate of the facility.

Deere & the UAW agree on a new six-year contract, pending a vote by the striking workers.

About 55% of Deere’s striking workers vote to reject a second contract between the company and the UAW that bumped up wages and bonus.

Deere says its latest offer is the “best and final”, adding it would keep all options open as the strike continues. The company and the union will continue talks, a Deere spokesperson says.

A majority of Deere & Co’s striking workers vote to approve a modified contract proposed by the farm equipment maker, ending a near six-week strike.

(Reporting by Ashwini Raj in Bengaluru; Editing by Arun Koyyur and Vinay Dwivedi) 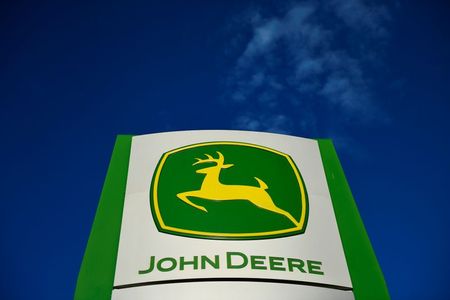 All Deutsche Bank businesses performing at or ahead of plan –...