(Reuters) -A majority of Deere & Co’s striking workers on Wednesday voted to approve a modified contract proposed by the farm equipment maker, ending a near six-week strike.

The United Auto Workers members of Deere ratified a six-year agreement by a vote of 61% to 39%, the union said. Deere said it has been informed that workers will resume operations on Wednesday evening.

The settlement is a relief to the agriculture industry that is already grappling with parts shortages and a tight labor market amid the U.S. corn and soybean harvest season.

Deere said last week it made “modest modifications” to its second proposal that was rejected by 55% of the UAW workers earlier this month. The company and the union did not elaborate on the modifications.

Workers at facilities in Illinois, Iowa and Kansas have been on strike since the middle of October after having turned down Deere’s attempts to tie them down to a new deal, prompting the company to say “all options are on the table”.

The workers demanded better pay from Deere, which forecast a record net income of $5.7 billion to $5.9 billion this year, to claw back concessions they made on some benefits in the past.

Deere has so far refused to comment on the impact of the strike on production. Bernstein analyst Chad Dillard expects the company to forecast fiscal 2022 net income below Wall Street estimates, in part due to the strike impact, when it reports results next Wednesday. 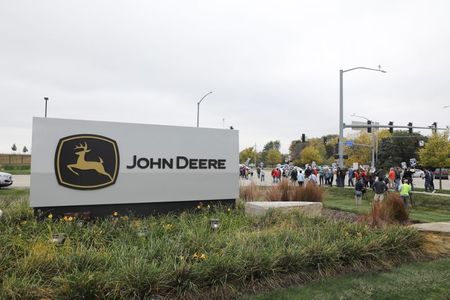 Verizon says majority of U.S. employees must be vaccinated

Mercedes-Benz teams up with SSAB to explore fossil fuel-free steel for...