(Reuters) -CD Projekt SA reported on Monday that its profit fell by more than half in the first quarter from a year earlier as its flagship game, “Cyberpunk 2077,” was kept off Sony’s PlayStation Store, which a company official said will continue to impact results.

“Cyberpunk 2077,” featuring Hollywood star Keanu Reeves, was one of the most anticipated games last year. It was delayed three times, and after a bug-ridden premiere it has been delisted from Sony’s PlayStation Store for more than five months.

CD Projekt did not say how many units of “Cyberpunk 2077” it sold in the quarter. The company’s chief financial officer, Piotr Nielubowicz, told a conference call that about 60% of first-quarter product sales came from Cyberpunk sales, without providing details.

Analysts have said sales were likely low, due to Cyberpunk’s absence from the PlayStation Store and release of a major patch just in late March.

“The general situation as long as we are not back on the Sony store has not changed. One of the leading marketplaces for us is not available and we generate most of the sales on the PC/digital channels,” a company official told the conference call.

Net profit in the first quarter fell 64.7% to 32.5 million zlotys, well below the 80 million zlotys expected by analysts, impacted by depreciation of Cyberpunk 2077 development expenditures and work on fixing the game. Revenue fell 2% to 197.6 million zlotys ($53.94 million).

Battered by Cyberpunk’s launch, CD Projekt plans to start parallel high-budget developments from 2022, as well as look for merger and acquisition opportunities.

Future sales growth, though, depends on its ability to re-engage Cyberpunk players. It confirmed plans to publish free downloadable content and update both Cyberpunk and The Witcher 3 to next-generation consoles in the second half.

Last year, the company’s shares hit an all-time high of 464.2 zlotys in the run-up to Cyberpunk’s launch, but have lost over 60% of their value.

“While results are weaker than expected, we think that much of the negativity related to the quarter is already priced-in,” Credit Suisse analysts said in a note. 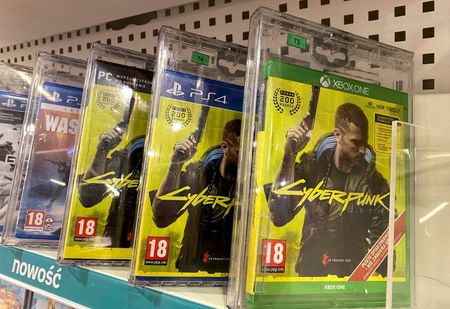 YouTube could be liable for unauthorised uploads if slow to act, German court rules