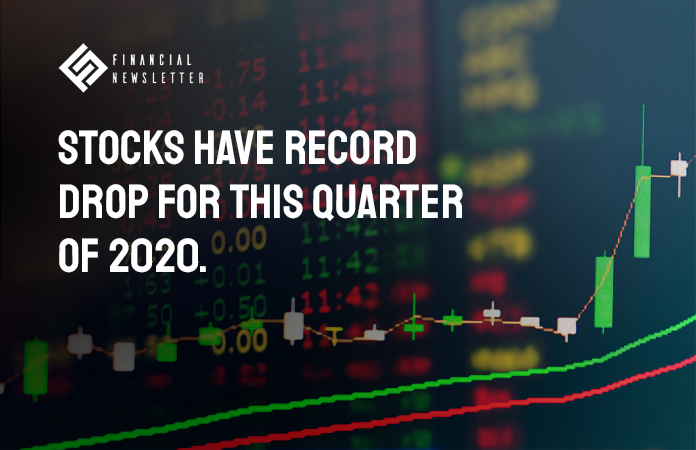 As the world is trembling upon the spread of Corona Virus, America has the most number of cases detected. Amidst social distancing, the economic condition has started hitting the nation. Due to the stock downfall, the Dow Jones Industrial Average has witnessed a huge loss in the quarter which was very unlikely to happen since 1987.

The spread of this infectious disease has already cost 3.3 million of unemployment throughout the country. The most troubled part is the blue-chip index at 1.8% dropin the last three months. The S&P 500 follows it in the course of recession at weeklong 17% rally. But, the Nasdaq 100 is in a better place with the dip-buyers are focusing onto the tech megacaps which are always rich in cash flow. Dow has faced such a crisis as the Dow investors; namely, Boeing tumbled the lowest for the year at 54%. Exxon and Chevron are not way behind at 39%. Out of 30 investors, only Microsoft has ended higher, at 0.01%.

As the government business bodies and other business and economic institutions had to shut their activity completely in order to fight the virus, the risk assets throughout the world have plunged. The US stocks were boosted from a bare 33% through the huge amount of government spending and monetary stimulus. But right now, GDP is affected and Goldman Sachs is preparing for a 34% deflation in the second quarter.

Amidst the crisis, there will be some major quarterly moves to be seen in the American economy. The Bull market was turned into a bear market after long 11 years in March, 12. Tripling the numbers before, the Cboe Volatility Index had a average at 57%. European shares in the stock market tumbled 20% since 2002, with Spain having the worst at 30%. West Texas Oil has reported the record loss of the quarter after losing 67%. The Treasury Yield has witnessed a good 1.94% in January and suddenly fell to 0.31% in the last two months. Gold has tumbled $200 Ounce as well. The future of the crisis can’t be overlooked as the Pound fell more than 6% in the last three months. The situation will impact the global market and economy in long run. IMF had already suspected that the situation can be worse than the global economic slowdown of 2009.  Now, as the deadly Coronavirus is matching deeper, and more number of cases identified regularly, the lockdown is expected to extend. So, the investors are expecting the Congress to provide a fourth round of Stimulus. President Trump was also reported to request a $2 trillion infrastructure package to fight the situation. Now New York being the epicenter of the pandemic, a long drawn fight waits ahead of us.

By Chris Prentice and Pete Schroeder ...

GM, Toyota employees to keep masks on in Texas even as state lifts mandate

London could lose out to New York under draft EU finance...

GM, Toyota employees to keep masks on in Texas even as state lifts mandate