(Reuters) – A 2020 ballot measure that exempted ride-share and food delivery drivers from a state labor law is unconstitutional, a California judge ruled on Friday, as it infringes on the legislature’s power to set workplace standards.

Gig economy companies such as Uber, Lyft, Doordash and Instacart were pushing to keep drivers’ independent contractor status, albeit with additional benefits.

However, in a ruling, Alameda County Superior Court Judge Frank Roesch wrote that the measure, known as Proposition 22, was unconstitutional.

“It limits the power of a future legislature to define app-based drivers as workers subject to workers’ compensation law”, making the entire measure unenforceable, the judge wrote.

The measure was the culmination of years of legal and legislative wrangling over a business model that has given millions of people the convenience of ordering food or a ride with the push of a button.

“We will file an immediate appeal and are confident the Appellate Court will uphold Prop 22,” a group supporting the measure, the Protect App-Based Drivers and Services Coalition, said in a statement.

Gig economy companies scored a decisive win in California in November, when voters of the Democratic-leaning state supported the company-sponsored Prop 22, overwriting a state law that would have made them employees.

The companies, whose business model relies on low-cost flexible labor, say that surveys show the majority of their workers do not want to be employees.

“Prop 22 has always been an illegal corporate power grab that not only stole the wages, benefits and rights owed to gig workers but also ended the regulating power of our elected officials,” Gig Workers Rising, which advocates for more benefits, said after the ruling. 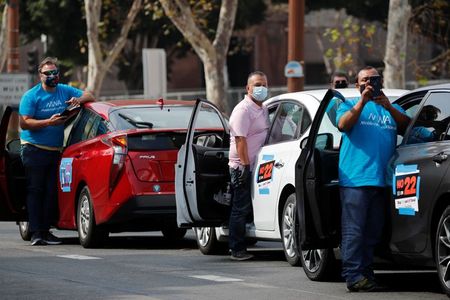 From bikes to blockchain: Shipping industry goes digital in lockdown