SAO PAULO (Reuters) – U.S. pesticide and seed maker Corteva Inc will take up to three times longer to break into Brazil’s genetically modified soy seed market than it did in the United States, where Corteva’s sales grew rapidly in recent years, the company said.

Brazil’s adoption of genetically modified crops helped it become the world’s biggest seller of soy used for livestock feed. But weeds and pests have become resistant to the chemicals those crops can withstand.

So Bayer and Corteva are each striving to convert Brazilian growers to their next-generation GMO seed varieties that can tolerate newer herbicides. At stake are billions of dollars in annual sales of seeds and herbicides to the important Brazilian market.

Moreover, the seeds that Brazil’s farmers choose, by playing a role in the size of their harvests, will influence world supply and prices for commodities that many countries rely on to feed their people and livestock. Soybeans are already scarce and prices are at a seven-year high.

Bayer and Corteva do not produce seeds themselves in Brazil. Rather, local genetic improvement companies tailor new varieties for the local market to address local soil and climate conditions — a process that can take years. Then, seedmakers mass produce seeds to sell to farmers for planting.

“The adoption of the Enlist system in Brazil will take a little longer than in the United States,” Corteva said in an e-mail to Reuters, because seed quantity in Brazil is limited.

The company had ample Enlist E3 seeds, the GMO technology that quickly took off in the United States, available for U.S. farmers in 2019 when Enlist received U.S. regulatory approvals.

Corteva, spun off in 2019 after a merger of Dow Chemical and Dupont, captured 35% of U.S. soy-planted area with Enlist in three years.

In Brazil, Corteva estimated it will take five to 10 years to reach that level.

Corteva is also launching a more expensive soybean seed in Brazil called Conkesta E3, but Enlist is its primary focus in the campaign to win market share from Bayer.

Bayer’s long dominance in Brazil’s seed market gives it an edge as it introduces a new product in Brazil at the same time as Enlist and Conkesta are entering the market. Bayer acquired seedmaker Monsanto in 2016 and inherited Monsanto’s seed and chemical empire.

Monsanto launched the Intacta RR2 Pro soybean seed technology in Brazil seven years ago. In the 2020/2021 cycle, 80% of Brazilian soy was grown with Intacta.

This year Bayer is launching its Intacta2 Xtend seed line in Brazil that resists the herbicide dicamba – a chemical Bayer is betting on globally as crops grow resistant to its earlier herbicide glyphosate.

Bayer said in an e-mail more than 30 seed varieties had been developed using its Intacta2 Xtend technology for the Brazilian market. That gives it an advantage over Corteva’s Enlist, which has not yet been adapted to the Brazilian market by local genetic seed companies.

Even so, at least one factor may work in Corteva’s favor. Dicamba is the target of U.S. lawsuits and a U.S. government review because of its tendency to drift away from where it is sprayed and damage crops on neighboring farms.

Bayer agreed to pay up to $400 million to resolve lawsuits by U.S. landowners who said their crops were damaged by neighbors spraying dicamba.

Problems with dicamba encouraged U.S. farmers to turn to Corteva’s Enlist products, and Brazilian farmers have followed the U.S. experience with dicamba closely.

“I will not buy the herbicide (dicamba),” said Eduardo Godoi, a farmer in Brazil’s top soy growing state of Mato Grosso who will try Intacta2 Xtend for the first time. 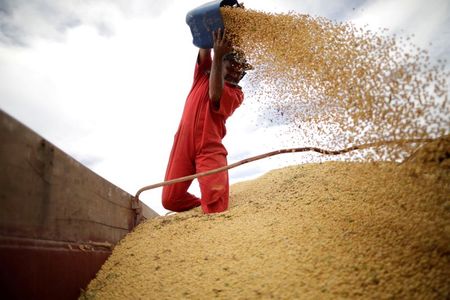 By Elizabeth Culliford and Nivedita Balu ...