FORT COLLINS, Colo. (Reuters) – Global wheat production is expected to reach a high-water mark this year, but the stocks situation for major exporters will be far from secure, potentially dropping to all-time lows.

The global corn harvest is also set for new highs, which unlike wheat is expected to build stocks, though relative tightness may also stick around in the corn market and it is uncertain whether the complete sigh of relief will arrive in 2022 or later.

Chicago wheat futures this week marked fresh nine-year highs and pushed more than $2.50 per bushel above Chicago corn futures, the largest wheat-corn premium for the most-actively traded contracts in more than eight years.

Corn futures are below highs set earlier in the year but are trading at nine-year highs for the date, and these elevated grain prices are driving the large spread. The price ratio of wheat to corn at 1.43 is a bit more normal in a historical context and has been observed a handful of times in recent years.

However, the wheat-corn futures ratio is above recent averages, and it fits in with what should be expected given global stockpiles of the two grains and especially when comparing their production and consumption trends.

U.S. Department of Agriculture projections for the 2021-22 marketing year suggest that wheat stocks-to-use among major exporters, including Russia and the United States, will fall to a collective 12.1%, the lowest in USDA records back six decades. That is down from 14.8% in the previous year and a five-year average just above 17%.

That is despite total global wheat stocks pegged at historically high levels, driven largely by China’s intentional hoard that will account for a record 51% of all wheat supply this year. China’s numbers have often been excluded from global grain analyses, though its recent surge in imports brings scrutiny to that process.

Globally, corn stocks-to-use is pegged below recent averages but slightly above the year-ago levels. The ratio of 8.7% when excluding China is among the lowest on record, though 22% with China is closer to the longer-term mean.

Most of the world’s exportable wheat for 2021-22 has already been harvested whereas a larger portion of the corn supply is still in the early stages in South America. But current predictions suggest wheat and corn are on differing paths when it comes to production versus consumption.

The global 2021-22 corn harvest is seen rising nearly 8% on the year to a new record, and that rise is a little stronger if excluding China. That comes after two years of fractional declines in annual output despite a continued increase in consumption, and it would be the first year in five where the crop over-satisfies demand.

On the other hand, wheat production is forecast nearly flat on the year, and it is the second consecutive season where demand growth should outpace the crop. In fact, global consumption is seen up 6% in the latest two years with only a 2% rise in output, the largest disparity in nearly a decade.

Relief for the sinking wheat supply should be on its way and North America could lead that effort. Both U.S. and Canadian farmers are expected to boost plantings for 2022-23, and that will go a long way for the global wheat outlook into 2023 assuming that a second disastrous drought is avoided.

Those supplies would come online in mid-2022, just before the first 2022-23 corn becomes available and simultaneously with 2021-22 South American corn offerings, so grain deficits might be short-term given strong or even normal output levels over the next year.

The 2022-23 corn situation is already being hotly debated when it comes to U.S. plantings. High fertilizer prices have spurred the idea that corn acres could be down significantly in the top producer and exporter, possibly maintaining relative tightness in global stocks.

The opinions expressed above are those of the author, a market analyst for Reuters. 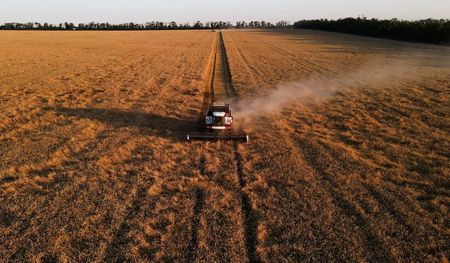 China appeals to WTO over Australian duties on three products