Chief Executive Scott Wine said while demand remained robust the company was currently seeing worsening component availability issues that were affecting many of its product lines.

“We are aggressively working to mitigate the situation and expect improvements throughout this quarter and limited impact on 2022,” Wine told analysts after the group trimmed its full year forecasts despite strong third quarter data.

The maker of farm machinery, construction equipment, Iveco commercial vehicles and powertrains, said its 2021 revenues were now seen at the lower end of the range it provided three months ago, indicating a rise of between 24-28%.

Chief Financial Officer Oddone Incisa told analysts that the impact of component shortages should peak in this quarter, while some raw material prices were expected to stay high for longer and freight costs to diminish only at the end of 2022.

Milan-listed shares in CNH Industrial fell after its results were released but later recovered and were flat by 1556 GMT. Early in the session they hit an all-time high of 15.58 euros.

CNH also slightly trimmed its free cash flow forecast for the year to around $1.0 billion, while supply chain disruptions contributed to a $700 million cash burn in the third quarter, it said.

The group last month announced temporary shutdowns of plants in Europe due to disruptions in procurements and a shortage of core components, especially semiconductors, and on Thursday it said it did not rule out that additional closures might occur.

In the July-September period the group’s adjusted earnings before interest and tax (EBIT) of industrial activities almost doubled, led by strong demand for agricultural machinery. They stood at $469 million, topping a $437 million forecast in an analyst poll compiled by Reuters.

Orders more than doubled year on year in the quarter both for tractors, in all regions, and for combines, especially in North America and Europe, CNH said.

As it prepares to spin off, under the Iveco Group name, its lower-margin truck, bus and engine operations, CNH earlier this year announced the $2.1 billion purchase of U.S.-based Raven Industries to bolster its in advanced areas of precision agriculture and autonomy.

Wine said on Thursday he was confident the deal would be finalised later this month.

Earlier this week CNH announced it had entered into a licensing agreement for electrification technologies with Monarch Tractor, a U.S company focused on fully-electric autonomous tractors.

The CEO confirmed CNH was on track to complete the spin off plan early in the first quarter of next year. 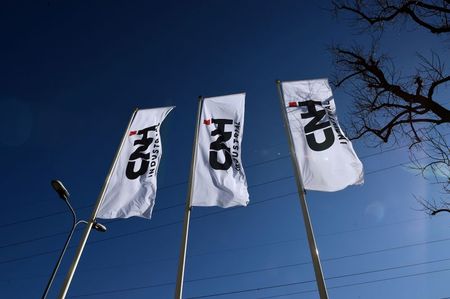