AMSTERDAM (Reuters) – Two environmental groups on Thursday lodged a complaint against Ahold Delhaize to the Dutch market regulator, saying the supermarket group fails to meet EU reporting directives by not disclosing how much plastic packaging it uses.

The complaint is the first of its kind in the Netherlands, said environmental law charity ClientEarth and Dutch NGO Plastic Soup Foundation, sent to the country’s Authority for the Financial Markets (AFM).

Ahold is “failing to disclose key information on its use of plastics and for failing to report plastic-related risk to its investors, in breach of its legal requirements,” they said in a statement sent to Reuters.

In response, Ahold told Reuters it reports on environmental matters to the UK’s Ellen MacArthur Foundation. It said it is taking steps to reduce plastic use at its stores, and “will work towards disclosing quantitative progress on plastics and packaging in its annual reports.”

With more than 7,000 stores in 10 countries, Ahold Delhaize is a leading supermarket operator in the Benelux and U.S. east coast, where it owns the Stop & Shop, Food Lion, Giant and Hannaford chains.

AFM said in a statement to Reuters it has encouraged companies to voluntarily report on non-financial issues since 2013, and oversees compliance with the EU directive.

Since 2017, public companies with more than 500 employees “have been obliged to report on non-financial (matters) in their management reports as part of their annual reporting,” it said.

AFM said it can order a company to publicly correct a “material deficiency” in reporting, but lacks the power to impose fines in such cases.

Roughly 300 million tons of plastic waste are produced annually, nearly equal to the weight of the entire human population, according to the United Nations Environment Programme.

With companies increasingly urged to be more environmentally friendly, Ahold should be more transparent about its plastic use, the NGOs said. “Yet Ahold Delhaize has not disclosed this information to investors – which is a breach of EU law.” 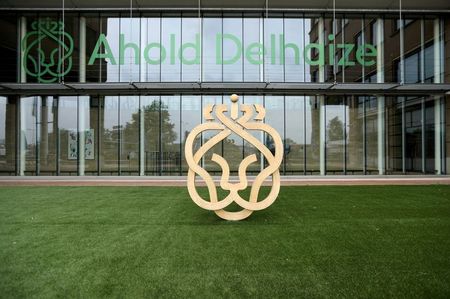