China’s announcement on Monday to allow married couples to have up to three children – from the previous limit of two – also sent brokerage analysts scrambling to recommend stocks, despite a widely-shared perception that the policy shift won’t have a sudden impact on the country’s declining birth rate.

Hu Yunlong, a Beijing-based hedge fund manager, said the sharp gains in such stocks were the result of “short-term speculation,” as he sees limited immediate impact on corporate fundamentals.

China lifted the cap on births in a bid to stave off risks to its economy from a rapidly aging population. But analysts say the policy by itself is unlikely to boost many couples’ willingness to have more children, given high childcare costs.

Meanwhile, Chinese listed companies fielded questions from investors anxious to learn how their businesses will be affected by the new policy.

Thinker Agricultural Machinery Co Ltd, a maker of rice harvesters, was asked if the company was a “third-child concept” stock.

“Thanks for your humorous question,” the company replied in an online investor relations platform.

The indirect relationship is that “an increase in population will increase grain consumption…and demand for harvesters.

“But the precondition is…people are willing to have a third child.” 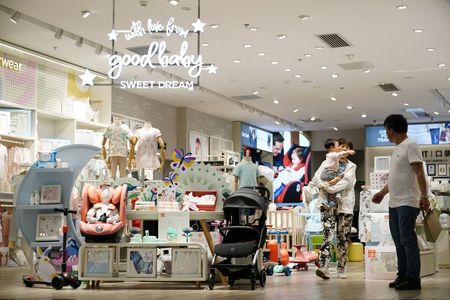 Sneaker maker Allbirds valued at over $3 billion in strong Nasdaq...