By Samuel Shen and Tom Westbrook

SHANGHAI/SINGAPORE (Reuters) -China’s push to wean property developers from excessive borrowing is spilling over into loan losses at banks and pain in credit markets as cash-strapped builders fall into distress, raising the risk of fallout rippling across the economy.

Debt and land-buying curbs and hundreds of new rules are hitting developers far harder than they had expected, setting off a scramble to sell assets as well as a steady drumbeat of bankruptcies, defaults and cut-price takeovers.

The regulatory push is the latest in years of efforts to reduce risks in the real estate sector and, as with crackdowns roiling the internet and education sectors, has not been formally announced.

Yet, unlike previous iterations, it is driving a heightened level of discomfort in markets as investors grapple with authorities’ persistence and with what is at stake for a sector that currently comprises about a quarter of the Chinese economy.

“The government is engineering a gradual decoupling between China’s economy and the real estate sector by reducing its importance,” said Xing Zhaopeng, senior China strategist at ANZ.

Capital is being reallocated to technology or other targeted areas, he said. What that looks like, so far, is a series of high profile property-sector defaults this year and a sharp deterioration in bond markets’ faith in China’s corporate borrowers.

The premium over risk-free yields that investors demand for China’s developer-dominated high-yield debt has surged 300 basis points in three months, whereas European and U.S. premiums have fallen. The divergence is the widest on record.

Bank loans are also turning bad where exposure is high, with bad debts in the property sector tripling for Shenzhen’s Ping An Bank in the first half and rising 53.5% at the Bank of Jinzhou and 25.8% at Bank of Shanghai.

Court records show about 220 real estate companies filed for bankruptcy so far this year, tracking at a slightly lower rate than the 390 filings during 2020.

“Markets should be prepared for what could be a much worse-than-expected growth slowdown, more loan and bond defaults, and potential stock market turmoil,” Nomura’s chief China economist Ting Lu wrote in a report published this week.

For now, the deepest damage is first being inflicted on developers confronting the end of an era of debt-fuelled growth.

China’s no.2 and the most indebted developer, Evergrande Group, issued a profit warning on Wednesday, citing declining prices and rising expenses in the first six months. Scores of smaller developers are faring even worse as the wheels come off from money-go-round models.

Fujian province’s Fusheng Group, for example, which in 2018 boasted how it would buy land, begin building within three months, make sales within six months and recover its investment within a year is now ailing and in the process of being bailed out by bigger rival Shimao.

“There’ll be no more big profits for developers,” said an executive at one mid-sized developer in eastern China, who requested anonymity because he is not authorised to speak publicly. “We’ve grown to feel numb about all this tightening.”

In the broader market – where property is a favourite asset – national price growth has hit a six month trough and realtors say transaction volumes have plunged as rising mortgage rates and restrictions on buyers choke the market.

“These measures are the most draconian I’ve ever seen,” said Steven Huang, a veteran agent in Shanghai at property broker Lianjia.com.

Another focal point for contagion risk is the financial system, where fears centre on exposure to Evergrande, an emblem of the boom which is now scrambling to meet what S&P Global estimates is $37 billion in debts due in the next year alone.

Executives were summoned by regulators last week and told to put their house in order to preserve stability – a move markets weren’t sure whether to interpret as a hint at support or a warning of what is to come.

To be sure, bad debts at commercial banks are steady and low with non-performing loans at 1.76% last quarter, according to the banking regulator, and some investors do not think a U.S.-style short-term-pain-long-term-gain wipeout is a likely event.

“That whole idea is not the style of how China’s government behaves,” said Tiansi Wang, a senior credit analyst at Dutch fund manager Robeco in Hong Kong. But a slower-burn shakeout may keep credit markets on edge for some time, investors said.

“Stability remains a priority, but not the only thing anymore,” said Wang. Meanwhile, Evergrande debt is driving the market and its bonds maturing in March have tumbled to trade around 50 cents on the dollar, indicating growing concern the developer will be unable to pay.

“(It) is creating some volatility in the short term but is positive for systematic stability in the long run.” 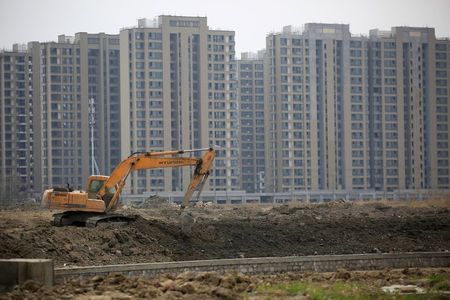 Coinbase to allow users to use card via Apple, Google wallets