China, the world’s top importer of soybeans, brought in 3.37 million tonnes last month from the U.S., down from 7.18 million a year earlier, data from the General Administration of Customs showed.

The trend for the year in U.S. shipments was lower, with imports during the first three months of 2022 falling 30% from a year earlier to 13.4 million tonnes, according to the data.

Last year’s imports were supported by Beijing increased purchases of U.S. farm goods, including soybeans, after an initial trade deal in January 2020 between the two countries.

U.S. cargoes in March last year were further boosted as rain slowed the harvest and exports from Brazil, China’s top supplier of the beans.

The data on Wednesday showed that soybean imports from Brazil in March were 2.87 million tonnes, up from 315,334 tonnes a year earlier.

Shipping delays following Hurricane Ida in the U.S. clipped the export window for American cargoes last year. So, Chinese buyers, whose appetite was curbed by poor crush margins, cut imports from the U.S. and waited for the Brazilian harvest.

However, a drought then hit Brazil’s new crop this year, cutting output and delaying some shipments. As the prices of Brazilian cargoes rose, Chinese buyers then turned to U.S. soybeans.

Chinese buyers might buy more from the U.S. for the price advantage during the export season of Brazilian cargoes, traders said.

Poor crush margins, hit by weak hog margins, continue to weigh on purchases of soybeans, which get crushed into soybean meal for the livestock sector and cooking oil.

Farmers in the major southwestern producing province of Sichuan now lose about 240 yuan ($37.51) on each pig raised.

China’s hog margins have hovered mostly in negative territory since the middle of last year. 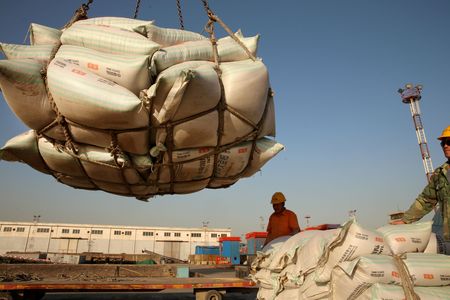 US August payrolls rise much less than expected, while wages heat...