The value of government land sales in October declined 13.14% from a year earlier to 573.7 billion yuan ($89.90 billion), after suffering a drop of 11.15% in September, according to Reuters calculations of data released by the finance ministry on Friday.

Poor demand among developers at urban land auctions risks squeezing regional finances, pressuring local governments to scramble for other income to fund investment and support the economy, including the issuance of more bonds that increase their debt obligations, say some analysts.

Not all provinces and regions are equally dependent on land-sale revenue.

“The unevenness in regional growth will persist, with developed provinces continuing to perform better than less-developed ones,” Moody’s said.

China’s government land-sale revenue grew 6.1% to 5.9371 trillion yuan ($930.29 billion) in January-October from a year earlier，data from the finance ministry showed, slowing from the 8.7% rise in the first nine months.

In February, the land regulator imposed restrictions on sales, allowing up to three auctions a year in 22 key cities including Beijing, Shanghai and Shenzhen, with the rules aimed at reining in rising land prices that could otherwise lead to higher home prices.

Private developers have bought at least 140.6 billion yuan of land in a completed round of auctions held by 22 major cities, down about 75% from 553.1 billion yuan in the first round of sales this year in March-June, according to a Reuters analysis of public notices on the sales.

China’s property woes have worsened in recent months, with prices lower in both new and resale homes in October amid deeper contractions in construction starts and investment by developers, weighing on the overall economic outlook. 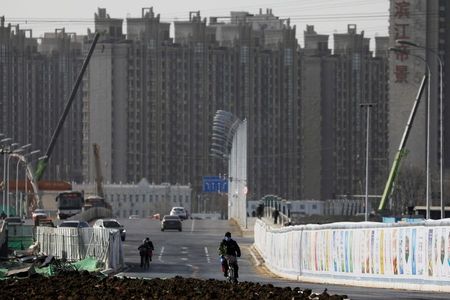