For the January-April period, industrial firms’ profits grew 106% from the same period a year earlier to 2.59 trillion yuan, bolstered by a virus-related plunge in activity early last year.

“The improvement of corporate performance is still uneven,” said NBS official Zhu Hong in a statement accompanying the data.

“The profitability of some consumer goods industries has not yet recovered to pre-epidemic levels; coupled with the high prices of bulk commodities, this has increased the pressure on the production and operation of midstream and downstream industries.”

Chemical products and metals processing firms recorded some of the highest year-on-year profit increases over the first four months, according to NBS data, recovering from the COVID-19-induced slump in economic activity in the same period last year.

“But this good time may not last as the government is clamping down on high commodity prices,” she said.

China’s economy posted record growth in the first quarter as it emerged from the pandemic although analysts expect the brisk expansion to moderate later this year.

Officials warn the foundations for economic recovery are not yet secure amid emerging problems, including pressures on firms caused by higher raw material costs as international commodity prices rise.

From the start of the year through mid-May, prices for China’s steel rebar, hot-rolled steel coil and copper – vital for the construction of machinery, buildings, appliances and vehicles – surged more than 30%.

Exports accelerated in April, as a brisk U.S. recovery and stalled factory production in virus-hit countries including India boosted overseas orders from China.

However, growth in factory activity and output slowed in April, with companies facing challenges such as chip and container shortages, problems in international logistics and rising freight rates.

Liabilities at industrial firms increased 8.6% year-on-year at end-April, down from 9.0% growth as of end-March.

The industrial profit data covers large firms with annual revenues of over 20 million yuan from their main operations. 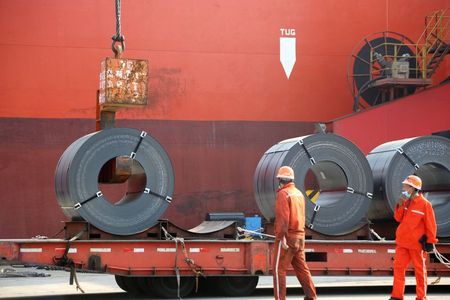 UniCredit kicks off second buyback for up to 1 billion euros