BEIJING/SYDNEY (Reuters) -China’s first C919 narrowbody jet to be delivered to launch customer China Eastern Airlines is about to enter final assembly, China’s aviation regulator said on Monday, with delivery due before the end of the year.

The C919, being built by state-owned planemaker Commercial Aircraft Corp of China (COMAC), will mark a milestone in a decade-long programme to rival aircraft made by Airbus and Boeing.

COMAC hopes to obtain a type certificate, which certifies the model as airworthy, by the end of the year.

The board also approved proposals to adjust the current plans for obtaining the aircraft’s production certificate, which is required for mass production, the regulator said, without giving further details. The C919 is currently in the more limited batch production phase.

(Reporting by Stella Qiu in Beijing and Jamie Freed in Sydney, editing by Richard Pullin) 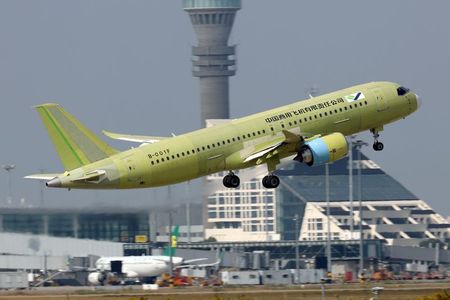 Nasdaq short interest up 5.6% in first half of March

LSE looks at ‘blank cheque’ deals to keep London ahead after...