BEIJING (Reuters) -China’s factory activity growth slowed slightly in May as raw materials costs grew at their fastest pace in over a decade, weighing on the output of small and export-oriented firms.

The official manufacturing Purchasing Managers’ Index (PMI) inched lower to 51.0 in May, against analyst expectations that it would remain unchanged from April at 51.1, data from the National Bureau of Statistics (NBS) showed on Monday.

The official PMI, which largely focuses on big and state-owned firms, has stood above the 50-point mark that separates growth from contraction for over a year.

While the Chinese economy has largely shaken off the gloom from the COVID-19 pandemic, officials warn the foundations for the recovery are not yet secure amid problems like higher raw material costs and the pandemic situation overseas.

Iris Pang, chief economist for Greater China at ING, said in a note that “external demand will likely remain flat” as economic recoveries in the United States and parts of Europe are likely to be “offset by increasing Covid cases in ASEAN, which is the biggest trade partner of China.”

Some emerging COVID-19 cases in China’s Guangdong province, where most electronic factories are located, continued semiconductor chip shortages and high commodity prices are also among the challenges facing producers, she added.

A sub-index for new export orders stood at 48.3 in May, down from 50.4 in the previous month and slipping sharply into contraction.

A sub-index for raw material costs in the official PMI stood at 72.8 in May, up from April’s 66.9 and hitting the highest level since 2010.

Prices for commodities such as coal, steel, iron ore and copper have surged this year, fuelled by post-lockdown recoveries in demand and easing liquidity globally.

China’s policymakers have repeatedly expressed concern about rising commodity prices in recent weeks and called for stricter management of supply and demand and to crack down on “malicious speculation.”

“We expect commodity prices to stabilize in the coming months,” said Louis Kuijs, head of Asia economics at Oxford Economics.

Tougher oversight on spot and futures markets and increased global commodity supply in the second half of 2021 should help reduce cost pressures on China’s firms, he said.

In addition to surging raw material prices, Chinese factories are struggling with high shipping costs and an appreciating Chinese currency. Some are able to pass on the higher costs to overseas customers, while some small firms are stopping taking orders to avoid losses.

A sub-index for the activity of small firms stood at 48.8 in May, sharply down from April’s 50.8.

Firms continued to lay off workers and at faster pace, the official data also showed.

In the services sector, activity expanded for the 15th straight month, and at a faster pace, with the non-manufacturing PMI index rising to 55.2 from 54.9 the month before.

China posted a record 18.3% growth in the first quarter, but analysts expect the brisk expansion to moderate later this year.

Policymakers have pledged to support job-creating small firms that were hit harder by the coronavirus pandemic. The central bank is trying to cool credit growth to help contain debt risks, but is treading warily to avoid hurting the economic recovery.

“The mixed data strengthens our case for policy stability in the near term, especially before the CCP’s centenary celebration in July,” said analysts at Citi in a note, referring to the ruling Communist Party. 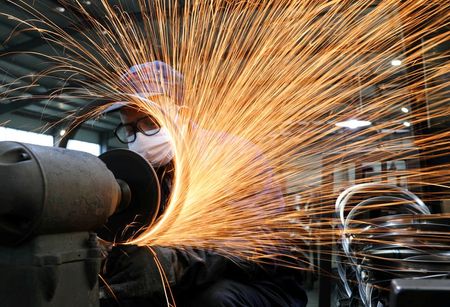 Return of coal a threat to European companies’ ESG ratings

Rolls-Royce says CEO did not suggest Raytheon aimed to spin off...