BEIJING (Reuters) – New bank loans in China likely fell in December, although lending for the full year 2021 set a record, a Reuters poll showed, as the central bank maintained policy support for the economy.

Chinese banks are estimated to have issued 1.25 trillion yuan ($196.06 billion) in net yuan loans last month, down from 1.27 trillion yuan in November, the median estimate in the survey of 21 economists found.

The central bank also cut the rates on its relending facility by 25 basis points (bps) to support the rural sector and small firms.

The economy faces multiple challenges heading into 2022 due to a property downturn and strict COVID-19 restrictions that have hit consumption and put pressure on the central bank to loosen policy.

China will continue to implement proactive fiscal policy and prudent monetary policy in 2022. It will keep economic operations within a reasonable range in 2022, said the Politburo, the country’s top-decision making body.

Broad M2 money supply growth in December was seen at 8.7%, compared with 8.5% the previous month.

Outstanding yuan loans were expected to grow 11.7% in December from a year earlier, the same as in November.

Any acceleration in government bond issuance could boost total social financing (TSF), a broad measure of credit and liquidity.

China has issued 1.46 trillion yuan ($229.30 billion) in the 2022 advance quota for local government special bonds to help spur investment and support the economy. 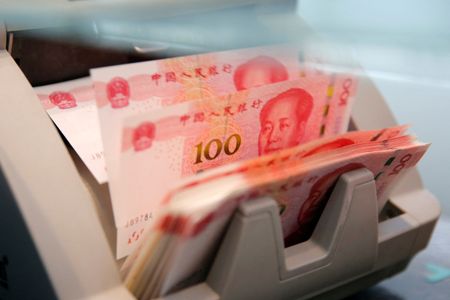