BEIJING (Reuters) – China’s new yuan loans are expected to rebound in August from the nine-month low seen in the previous month, a Reuters poll showed, as the central bank seeks to support the country’s economic recovery.

Banks are estimated to have issued 1.30 trillion yuan ($201.21 billion) in net new yuan loans last month, up from 1.08 trillion yuan in July, according to the median estimate in the survey of 31 economists.

That would be higher than 1.28 trillion yuan issued the same month a year earlier.

Sun Guofeng, head of the central bank’s monetary policy department, said there is no shortfall of base money or liquidity supply and that demand would remain basically balanced in coming months.

In July, the PBOC cut the reserve requirement ratio (RRR) for banks, releasing around 1 trillion yuan in long-term liquidity. Analysts expect another RRR cut this year.

Annual outstanding yuan loans were expected to grow by 12.3% for August, the same as in July, the poll showed. Broad M2 money supply growth in August was seen at 8.4%, up from 8.3% the previous month.

China’s local governments issued a net 1.3546 trillion yuan in special bonds in the first seven months of 2021, the finance ministry data have shown.

Any acceleration in government bond issuance could help boost total social financing (TSF), a broad measure of credit and liquidity. Outstanding TSF growth slowed to 10.7% in July from a near three-year high of 13.7% in October 2020. 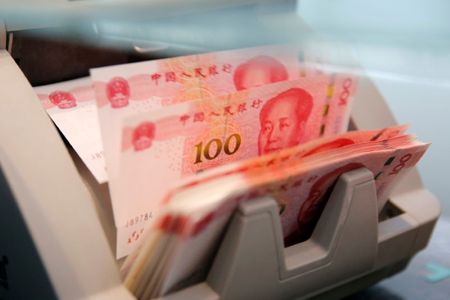