Home Stock News China shocks the world with this confession and the DOW futures drop... 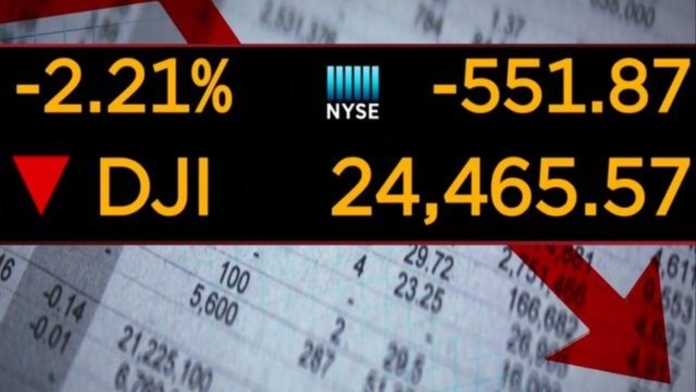 The DOW Futures took a massive drop of 520 points on Sunday after the news of coronavirus spreading out to Italy and South Korea confirmed the news of the global pandemic. Adding to this, the surprising confession from the Chinese Premier Xi JinPing suggests the fact that the virus outbreak is far from being contained and it is rightfully a global threat now.

All the major Stock indices on Sunday afternoon slumped down drastically. The S&P 500 fell by 1.2%, Nasdaq slipped 1.5% while the DOW Jones Industrial Average Index trailed off by 1.8%. WTI crude oil plummeted along with the stock market and dropped by 2.5% to remain at $52.38. Amidst all of these, Gold is hitting new highs and setting a benchmark of being a haven for investors in this period of an economic slowdown. The price of gold in the commodity sector went above a staggering $1600!

With the Chinese government exposed regarding its shortcomings, the DOW bulls have to finally face the curb of the global economic slowdown. The economic reality is all set to step in the US market and experts can feel the vibe of an upcoming recession period. Wall Street’s mood has had a complete swing since the Chinese Premier used the “crisis” in his admission of the failure in containing the virus. Now that the virus has spread its roots to Iran, Korea and Italy, China cannot control the word of mouth doings the rounds regarding its failure in the International circuit. South Korea has reported 600 cases of the virus and yet again put the entire country in a high alert zone.

Iran has as of yet reported 8 deaths due to the coronavirus and it has sealed its borders with neighboring states. The World Health Organisation is worried due to the spread in Iran more because they do not have the infrastructure to deal with the diseases on a large scale such as China or Japan. In Italy, 11 cities are locked down to contain the spread of the virus and it is considered as the hub in Europe because it reported 155 cases in the last couple of days.

Google told its scientists to ‘strike a positive tone’ in AI...