SHANGHAI (Reuters) – Benchmark lending rates for China’s commercial banks are likely to be lowered at a monthly fixing on Wednesday, a Reuters survey showed, as Beijing cautiously eases monetary conditions to aid an economy hit by coronavirus lockdowns in several cities.

The loan prime rate (LPR), which banks normally charges their best clients, is set on the 20th of each month, when 18 designated commercial banks submit their proposed rates to the People’s Bank of China.

A vast majority of the 28 traders and analysts surveyed in a snap Reuters poll on Tuesday expect a reduction this month.

Among them, 11, or 39% of all respondents, predicted a marginal cut of 5 basis points (bps) to both the one-year loan prime rate (LPR) and the five-year rate on Wednesday. Another six participants also expect a reduction to either rates within a range of 5 to 10 bps.

The remaining 11 respondents expected both rates to remain unchanged this month.

Most new and outstanding loans in China are based on the one-year LPR, which currently stands at 3.7%. The five-year rate, which influences the pricing of home mortgages, is 4.6%.

China last lowered the LPR in January, and has held the rates steady in the following two months.

Expectations for imminent monetary easing were heightened last week when the People’s Bank of China (PBOC) cut the amount of cash banks must hold in reserves.

“The easing cycle is still underway, but is not in the traditional format,” said Ken Cheung, chief Asian FX strategist at Mizuho Bank, who expected a 10 bps cut in the LPR on Wednesday.

The PBOC has eased policy cautiously, lowering the RRR by a smaller-than-expected margin to provide a relatively modest cash injection.

The divergence in policy could lead to money flowing out of China and weaken the yuan.

“It seems liquidity injection is the preferred way to support the growth amid the rising uncertainty from the global inflation and faster than expected Fed tightening,” said Tommy Xie, head of Greater China research at OCBC Bank.

The PBOC kept borrowing costs of its medium-term lending facility (MLF), which serves as a guide to the LPR, steady for the third straight month last week. 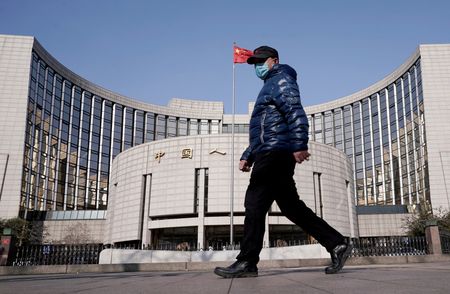 Fed’s Powell to tamp down taper talk on Hill, stick with transitory inflation

Leonardo’s DRS to land on Nasdaq with RADA takeover