HONG KONG (Reuters) -Shares of China Huarong Asset Management Co Ltd plunged as much as 55% in Hong Kong on Wednesday to a record low, after trading resumed following a nine-month hiatus, even as the bad loan company said its restructuring had paved the way for healthy growth.

Huarong, which counts China’s finance ministry as its largest shareholder, suffered huge losses and its former chairman was convicted of bribery, leading to a state-backed bailout last year.

The price is also the lowest since Huarong’s listing in 2015, and represents a nearly 50% discount to the company’s net asset value, reflecting investor pessimism.

In an apparent effort to inject some optimism, Huarong’s management said on Wednesday that recent capital injections by strategic investors would breathe new life into the company.

Huarong has raised 42 billion yuan from investors led by Citic Group in a state-backed restructuring.

Strategic investors have replenished capital and “laid the ground for sustainable and healthy growth,” Vice President Wang Wenjie said in a speech that was posted on Huarong’s website. “The company has the ability, and condition, to generate returns for our shareholders.”

Huarong, one of four major state-owned distressed-debt managers, halted trading in its shares in April 2021 after missing a March 31 deadline for filing its 2020 earnings.

In August, Huarong announced a nearly $16 billion annual loss for 2020, and in November, it unveiled its restructuring plan.

Huarong said on Wednesday that it had sold shares through private placement to strategic investors at 1.02 yuan apiece, boosting the company’s net asset value (NAV) per share by 60% to 0.75 yuan.

The placement price, which is much higher than the NAV, reflects “investors’ optimism toward the company’s long-term growth prospectus,” and is good for small investors, a Huarong official said.

The company reiterated on Wednesday that it will focus on its core business going forward, and seek synergies with strategic investors.

Huarong has previously announced a slew of asset divestment deals, including stake sales in its consumer finance, securities and distressed asset exchange businesses, amid a regulatory push to sell non-core assets in its business revamp. 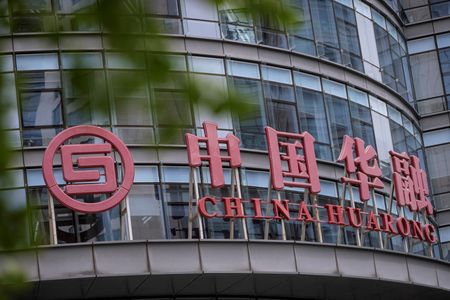