BEIJING (Reuters) – China’s factory activity expanded at the fastest pace this year in May as domestic and export demand picked up, though sharp rises in raw material prices and strains in supply chains crimped some companies’ production, a business survey showed on Tuesday.

The Caixin/Markit Manufacturing Purchasing Managers’ Index (PMI) rose to 52.0 last month, the highest level since December and inching up from April’s 51.9.

Analysts polled by Reuters had expected the index to remain at 51.9. The 50-mark separates growth from contraction on a monthly basis.

New orders rose at the strongest pace so far this year and a gauge for export orders was the highest since November, but the output reading, while still solid, was slightly lower than the previous month.

A sub-index for input costs expanded at the fastest pace since 2016.

Manufacturers passed on some of the pressure to their customers, with a gauge for output prices rising at the quickest pace in a decade. Charges for exported goods rose at the fastest rate in three years.

Prices for commodities such as coal, steel, iron ore and copper have surged this year, fuelled by the lifting of pandemic lockdowns in many countries and ample global liquidity.

China’s policymakers have repeatedly expressed concern about rising commodity prices in recent weeks and called for stricter management of supply and demand and to crack down on “malicious speculation.” The warnings have prompted some pullback in metals prices but analysts are unsure how long such a correction may last given improving global demand.

Firms continued to hire but at a slower pace, with some enterprises saying they were trying to reduce costs.

Earnings at China’s industrial firms grew at a slower pace in April, with high commodity prices and weaker performance in the consumer goods sector limiting overall profitability from manufacturing.

China’s economy posted record growth in the first quarter as it recovered quickly from the pandemic although analysts expect the brisk expansion to moderate later this year.

Officials warn the foundations for economic recovery are not yet secure amid problems like higher raw material costs. 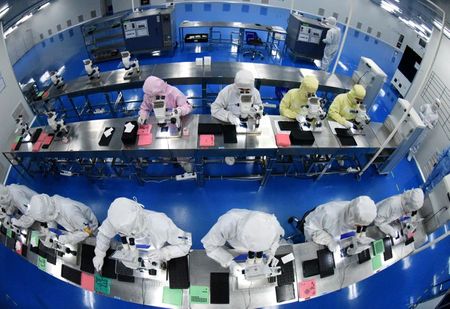 Ericsson shares drop after probe on graft in Iraq when ISIS...