BEIJING (Reuters) – China’s new bank loans unexpectedly rose in May from the previous month but broader credit growth continued to slow, as the central bank seeks to contain rising debt in the world’s second-largest economy.

Top Chinese leaders have repeatedly vowed to avoid any sharp policy turns, keeping borrowing costs low and telling banks to maintain support for small firms, while being more watchful about extending credit to hot areas of the economy such as property.

“The peak of the credit cycle must have passed, but the downward slope seems to be smoother than expected,” said Luo Yunong, fixed income analyst at Industrial Securities.

Chinese banks extended 1.5 trillion yuan ($234.76 billion) in new yuan loans in May, up from 1.47 trillion yuan in April and beating analysts’ expectations of 1.41 trillion yuan, according to data released by the People’s Bank of China (PBOC) on Thursday.

The tally also was higher than the 1.48 trillion yuan issued the same month a year earlier, when policymakers rolled out unprecedented measures to deal with the shock from the coronavirus crisis.

As expected, growth in outstanding yuan loans eased to 12.2% year-on-year, the slowest pace since February 2020, and compared with 12.3% in April. Excluding that early 2020 period, it marked the slowest growth since 2002, according to Capital Economics.

Broad M2 money supply grew 8.3% from a year earlier, above estimates of 8.1% forecast in the Reuters poll and matching the pace in April.

In 2020, the central bank encouraged banks to lower rates for virus-stricken firms and extended loan payment deadlines for small companies, among other measures, to give borrowers breathing space during the coronavirus crisis.

But with the economy back to pre-pandemic levels, policymakers are now looking to slowly unwind emergency measures and cool credit growth to contain debt risks, without impeding the recovery.

PBOC Governor Yi Gang said on Thursday that inflation is “basically under control”, and monetary policy would be kept steady, in comments a day after data showed the fastest rise in factory-gate prices in over 12 years.

Growth of outstanding total social financing (TSF), a broad measure of credit and liquidity in the economy, slowed to 11% in May, the weakest pace since February 2020, and compared with 11.7% in April.

Analysts attributed to the weaker TSF growth to slowing issuance of corporate and government bonds, and a contraction in shadow credit, which could hamper economic growth in the future.

“The slowdown in credit growth is happening even faster than we had been anticipating a couple of months ago,” Julian Evans-Pritchard at Capital Economics said in a note.

“While the economy has so far weathered the withdrawal in policy support very well, the usual lags mean that weaker credit growth will become a growing headwind to activity over the next few quarters.” 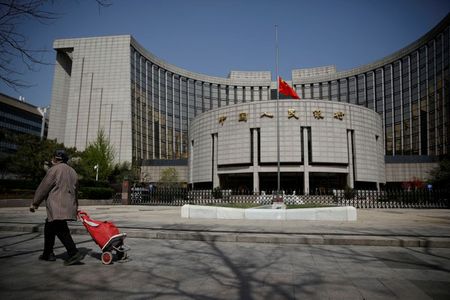 Regulating crypto assets would protect ‘the rest of us’: Fed’s Waller