The U.S. company raised its holding by 99.3% to 602,060 sponsored American Depository Shares as of Dec. 31, Daily Journal said in a regulatory filing on Tuesday, making the stake worth about $72 million as of Jan. 4.

Munger, 98, has long been bullish on China. The vice chairman of Berkshire Hathaway had previously praised the country’s crackdown on Jack Ma’s Ant Group, the fintech giant whose record $37 billion IPO was derailed by regulators in November 2020.

China’s technology giants have come under heavy regulatory pressures and are grappling with major fines, with Alibaba paying $2.75 billion for anti-monopoly violations.

Amid an onslaught of competition in the e-commerce space, a slowing economy and a regulatory crackdown, Alibaba’s U.S.-listed shares had in 2021 lost more than 48% of their value.

(Reporting by Chavi Mehta in Bengaluru and Jonathan Stempel in New York; Editing by Arun Koyyur) 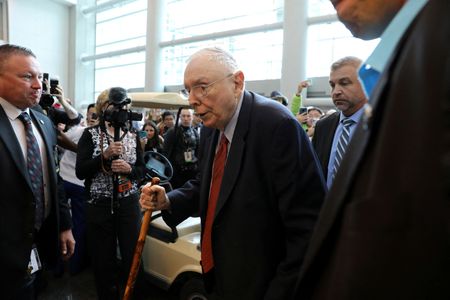 Apple invests millions to back entrepreneurs of color, part of racial justice effort