TORONTO (Reuters) – A campaign pledge by Canada’s ruling Liberals to raise corporate taxes on banks to help pay for pandemic relief could lead to job cuts and higher borrowing costs as the lenders take steps to protect their profits, investors and political analysts said.

Seeking an edge in a tight race ahead of the Sept. 20 election, Prime Minister Justin Trudeau said last month his party, if re-elected, would hike the net tax rate on the country’s most profitable banks and insurance companies to 18% from 15% on all earnings over C$1 billion ($792 million), generating C$2.5 billion a year over four years.

Trudeau said that given the banks’ big profits, “we’re going to ask them to do a little bit more” to help deal with the country’s recovery from the pandemic. His government has run up record deficits dealing with COVID-19, drawing fire from the main opposition Conservatives, who hold a narrow lead in opinion polls.

But if the tax hikes are enacted, the biggest lenders, which would be the most affected, could respond by cutting jobs and raising borrowing costs, while the reduced earnings could hit retirees, investors said.

“The banks employ, across the board, well over 100,000 people. If their taxes are going up, maybe the banks fire more people,” said Bryden Teich, portfolio manager at Avenue Investment Management, who holds bank shares.

“Is that what they want?” Teich said of the Liberals.

The lower earnings resulting from the increased payments would also weigh on banks’ stocks that “so many retired Canadians rely on for dividends,” he added.

The Canadian bank stocks index is down 3.3% since it peaked at a record before the Aug. 25 announcement, compared with a 0.7% rise in the benchmark Toronto index.

Banks are among the most profitable companies in Canada, with the biggest lenders topping earnings expectations for their just-reported third quarter. They paid C$12.7 billion in taxes in 2019, employing more than 280,000 people, according to the Canadian Bankers Association.

But Canada’s combined federal-provincial corporate tax rate of 26.5% is the third lowest in the Group of Seven, after the UK and the United States, data from the Tax Foundation showed.

Abacus polling shows at least 70% of Canadians feel large corporations and wealthy individuals do not pay their fair share in taxes.

The impact on the biggest life insurers would be capped at 0.4%, Dechaine said.

The Liberals’ proposal also includes a special dividend, which could equal over C$1 billion a year over four years, he added.

“This part of the Liberal proposal is the most confusing, as it equates to a special dividend paid to the Federal Government out of shareholders’ equity,” Dechaine said.

The banks either did not respond or declined to comment.

The move could also benefit large corporations at the expense of smaller borrowers.

“It’s unlikely (the banks will) push the costs onto larger borrowers like corporations that have more power,” said Marius Zoican, assistant professor of finance at the University of Toronto. “The tax increases will be passed on to customers who are relatively more inelastic in demand.”

The move may not achieve the voter support the Liberals hope for, said Mike Van Soelen, managing principal of consulting firm Navigator.

The Liberals’ proposal is “too nebulous and far removed from the average person,” unlike other parties’ calls for moves such as tackling bank fees, which resonate more, he said.

Duff Conacher, co-founder of advocacy group Democracy Watch, said other measures, including more transparency about lending practices and limits on rate rises must be implemented alongside the tax increase for it to be effective. Its temporary nature also limits its impact, he said.

As things stand, “I’d rather see the banks put the money they’re going to pay in tax to work lending to people who have been discriminated against in lending rather than go into government coffers,” he said.

(Reporting by Nichola Saminather; Editing by Denny Thomas and and Peter Cooney) 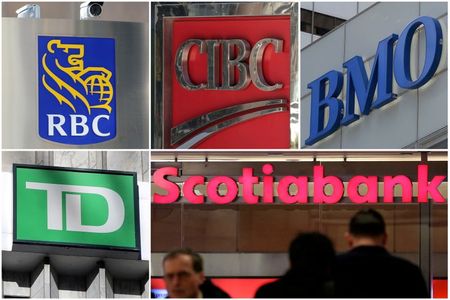 Your questions on the lockdown and U.S. small business, answered

Analysis: Investors seek out ‘back to the future’ trades to beat inflation as bond...

Shareholders may pursue 737 MAX claims against Boeing board, court rules

Daimler CEO: ‘We need an honest conversation” about EVs and jobs

Yellen says higher interest rates would be ‘plus’ for U.S., Fed-...