(Reuters) -Canadian retailer Loblaw Cos Ltd raised its annual earnings outlook after posting third-quarter revenue and profit that beat estimates on Wednesday, helped by robust demand for groceries and other essential items during the COVID-19 pandemic.

Retail sales in Canada rebounded in August thanks to the easing of restrictions in several parts of the country, which included in-store capacity limits and a temporary ban on the sale of discretionary goods.

Loblaw said that demand for back-to-school and Thanksgiving seasons was also strong, signaling a return to pre-pandemic routines.

The company also said its online sales remained above pre-pandemic levels and are on track to exceed C$3 billion in 2021, which would be higher than the C$2.8 billion recorded a year earlier.

As a result, Loblaw said it now expects adjusted profit per share to rise by the low-to-mid thirty percent range, compared with a prior forecast of low-to-mid twenties percentage growth.

Revenue rose to C$16.05 billion ($12.77 billion) in the third quarter from C$15.67 billion from a year earlier, surpassing analyst estimates of C$15.89 billion, according to IBES data from Refinitiv.

Net earnings available to common shareholders rose to C$431 million, or C$1.27 per share, in the three months ended Oct. 9, from C$342 million, or 96 Canadian cents per share, a year earlier.

(Reporting by Mehr Bedi in Bengaluru; Editing by Ramakrishnan M.) 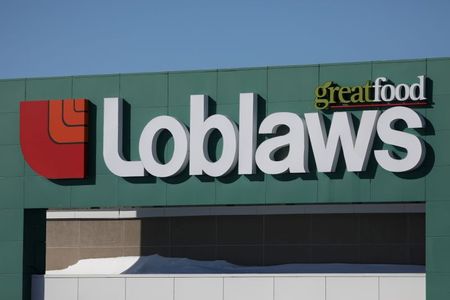