CIBC’s loan balances climbed 8% as of July 31, while TD’s fell 0.5% from a year earlier, as declines in the latter’s U.S. lending offset strong loan growth in Canada. This contributed to flat revenues at TD, while CIBC’s rose 7%.

U.S. loan growth is expected to pick up as liquidity shrinks, he said.

All of Canada’s biggest banks this week reported profits that beat expectations, driven by improving provisions for credit losses (PCL). Most also showed signs of recovery in lending, particularly to Canadian businesses even as mortgage growth continued, with that strength helping eclipse continued pressure on margins.

Bank of Nova Scotia, however, stuggled as its loan growth at home was eclipsed by declines in its sizeable Latin American business, although analysts were optimistic about a turnaround in coming quarters.

TD’s “loan growth remains a struggle, which does not appear to be solely a result of (the) run-off” of the United States’ pandemic-driven loan forgiveness program for businesses, Barclays Analyst John Aiken said in a note.

Continued high deposit levels could slow loan growth recoveries in some areas, some of the banks have warned. At CIBC, credit utilization rates, while improving, remain low, and although credit card purchases are rising, outstanding balances are expected to be built up much more slowly, executives said on an analyst call.

Separately CIBC said it aims to achieve net-zero greenhouse-gas emissions in its operational and financing activities by 2050, and will set interim targets to do so starting next year.

Both TD and CIBC benefited from strong growth in wealth management revenues from a year earlier, which helped drive a 13% increase in non-interest income in TD’s Canadian retail unit, and a 25% jump in CIBC’s.

For earnings details of both banks: 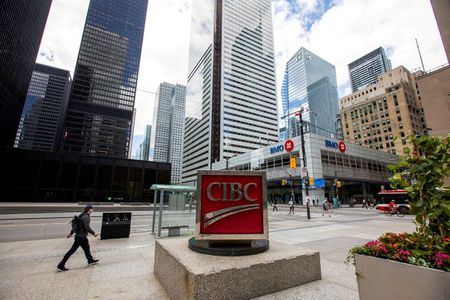