Home Business Canada inflation could be at peak, but that is little relief for...

OTTAWA (Reuters) – Canada’s headline inflation may have peaked after hitting a 31-year high in March, economists said, though the central bank still faces an uphill battle to bring rocketing prices back to earth.

Even if March’s 6.7% is the peak and price escalation slows next month, inflation will remain at levels last seen 30 years ago and economists say the Bank of Canada will need to act aggressively to get closer to its 2% target.

To be sure, there is also a chance inflation could surge even higher, particularly as Statistics Canada adds used car prices – a key driver of U.S. inflation – to its index and updates the weighting of its baskets in the coming months.

March’s stronger-than-expected print has economists calling for a second 50-basis-point (bp) increase in June to take rates to 1.5%, with money markets betting on a total of 250 bp worth of hikes this year.

Some economists already predict a third 50-bp hike in July, with Scotiabank calling for a 75 to 100 bp move in June or July. The central bank typically moves by just 25 bp at a time.

“The peak is just one milestone, then you need to get inflation down and that’s going to take a while in order to get to some acceptable range,” said Jimmy Jean, chief economist at Desjardins Group. “We’re not expecting that until early 2023.”

The Bank of Canada at a rate decision last week said it sees inflation averaging almost 6% in the first half of this year, easing to 2.5% later in 2023 and then declining to 2% in 2024.

After doubling its key policy rate to 1% at that decision, Bank of Canada Governor Tiff Macklem said the bank would continue to act “forcefully” if needed.

Countries around the world are grappling with runaway inflation amid surging demand and constrained supply chains. Russia’s invasion of Ukraine has added to the pressure, sending commodity prices sharply higher.

Any easing of those factors is expected to be gradual, said economists. At the same time, Canada’s Liberal-led government is still pumping stimulus into the economy, albeit at a slower pace, helping drive domestic inflation.

That leaves the Bank of Canada holding the bag. Later this month it will begin reducing its government bond holdings, allowing them to roll off as they mature, but interest rates remain its main tool in the fight against inflation.

Canada’s frothy housing market, with prices up more than 50% in two years, and high levels of household debt will weigh on the central bank’s path, said economists.

But some relief is coming. Inflation has now been above 3% for 12 months and as subsequent months start to lap strong year-ago levels, the base effect should help temper outsized gains, barring any major global shocks, said economists.

Gasoline price increases have so far slowed in April from March, and the housing market is showing signs of cooling.

And the upward pressure of used car prices will not show up in the April data, Statscan said. It will provide details on how and when that change will take effect on May 18.

“It would take a brave person to call this the peak, but provided energy prices don’t spike further, this may indeed be the apex for headline inflation,” said Doug Porter, chief economist at BMO Economics, in a note. 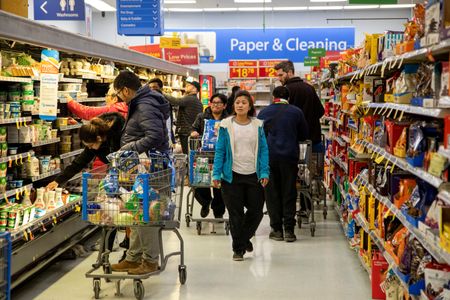 By Tom Westbrook and Sam Byford ...

A look at the day ahead in markets from Dhara...

EDF to seek new CEO as France renationalises the utility

PARIS (Reuters) -EDF and the French state will kick off...