LONDON (Reuters) -British retailer Marks & Spencer forecast a rebound in profit this year after an 88% slump in 2020-21 that reflected a collapse in clothing sales due to the COVID-19 pandemic but warned investors not to expect a dividend this year.

Chief Executive Steve Rowe said the results masked progress made in the 137-year-old group’s latest turnaround plan, while trading in the early weeks of its new financial year had been encouraging.

Rowe, along with chairman Archie Norman, has focused on transforming the company’s culture, improving clothing and food products and value to broaden its appeal, while closing stores and investing heavily in technology and e-commerce, including a joint venture with Ocado.

“By going further and faster in our transformation during this period of disruption…we have now moved beyond fixing the basics to forge a reshaped M&S that is ready for the next phase,” he told reporters.

“We now have a clear line of sight on the path to make M&S special again,” he said.

With online penetration of its clothing and home business expected to grow to up to 50%, Rowe said M&S would accelerate the re-shaping of its store estate.

M&S currently has 254 full line stores, selling clothing and homeware and food. It is now targeting a fully modernised core of about 180 stores.

In food, where space remained open during the crisis, like-for-like sales rose 1.3%.

All UK clothing retailers have been hit hard by the pandemic. Last month Primark which does not trade online, reported a drop in annual profit of 90%. Next, which has a huge online business, has shown greater resilience but its full-year profit still fell 53%.

M&S said trading for the first six weeks of the 2021-22 financial year had been ahead of the comparable period two years ago and its central expectations.

It forecast underlying pretax profit to recover to 300-350 million pounds in 2021-22 and a further reduction in net debt. 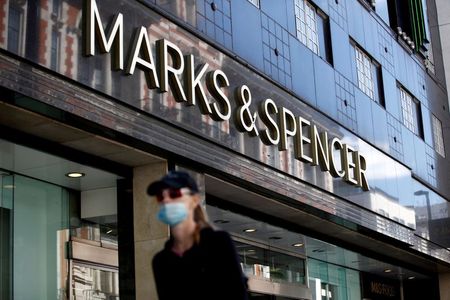 Too late for some as Ukraine IT firms agonised over relocating

Hermes bounces back in China as margin hits record high