TOKYO (Reuters) – The Bank of Japan’s next policy move will unwind, rather than strengthen, its massive monetary easing, according to more than 90% of economists polled by Reuters, though most said the change was unlikely before the latter half of 2023.

The direction and timing of the BOJ’s next move are subject to more than usual attention. Not only is the BOJ an outlier as central banks elsewhere tighten, but the 10-year tenure of the governor who has presided over the prolonged loose policy, Haruhiko Kuroda, will end in April. Also, inflation is at a 40-year-high, partly because low Japanese interest rates have helped weaken the yen.

Twenty-four of 26 economists in the Nov 15-25 poll said the BOJ’s next action, if any, would be “unwinding its ultra-easy monetary policy”.

However, 20 of them said the BOJ would not make the move until the second half of 2023 or later. Two respondents said the timing would be June 2023. One each chose earlier options: April and January.

“Unlike in the U.S. or Europe, the BOJ has no reason to hasten a tightening, since the yen’s weakening pace has slowed down and consumer inflation here remains modest when food and energy items are not counted.”

The most likely option for the BOJ, were it to scale back its easing, would be tweaking the wording of its forward guidance, according to 13 of 24 respondents to a question allowing multiple selections.

Widening the controlled range of 10-year government bond yields from the current “around plus and minus 0.25 percent” was the second-most likely means, chosen by 10 respondents. Eight selected shortening of the maturity of the yield target to less than 10 years, and eight others thought the BOJ would cease to keep short-term interest rates negative.

BOJ watchers were almost evenly divided when asked about the need to revise a joint statement set in 2013 between the Japanese government and the central bank. Widely known as the policy accord, it requires the central bank to achieve its 2% inflation target “at the earliest date possible.”

Among those who wanted a revision, seven called for more flexibly judging achievement of the inflation target. BOJ leaders have said “sustainable and stable” 2% inflation is needed.

One BOJ watcher calling for change wanted a lower inflation target, and another said the BOJ’s mandate should be enlarged to include targeting employment or wage rises.

Two economists in the poll said the accord should simply be abolished. “Japan’s economy is no longer in deflation” unlike when the policymakers crafted the agreement nine years ago, said Nobuyasu Atago, chief economist at Ichiyoshi Securities.

Another question asked how long the yen would be at risk of weakening against the U.S. dollar. Twelve of 26 economists said it would until the end of this year, while eight thought the risk would last “until the first half of 2023”.

“While many in the market see a trend shift, the risk of another dollar gain lingers at least for the rest of the year with uncertainties over the U.S. inflation and the Fed’s rapid tightening outlook,” said Hiroshi Watanabe, senior economist at Sony Financial Group.

Only three said “there’s no risk of further yen weakening”, but just as many thought currency would keep facing a risk of depreciation until the second half of 2023 or later.

Elsewhere in the poll, a median estimate of 32 respondents showed the Japanese economy growing an annualised 3.1% in October-December, faster than the 2.0% projection in an October poll, following an unexpected contraction in the third quarter.

But economists’ forecast for Japan’s fiscal 2022 economic growth was cut to 1.7% from 1.9% in the previous poll, while the core consumer inflation rate for the same period was slightly upgraded to 2.7% from 2.6%.

(For other stories from the Reuters global economic poll:) 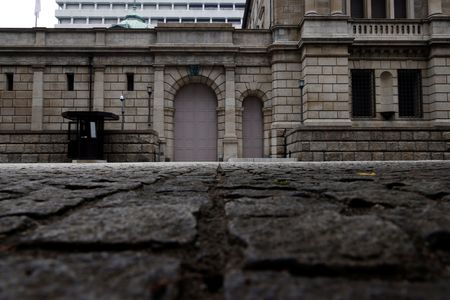 Jump in U.S. job openings may jolt Fed yet again

Factbox-Inflation ‘eats away’ at Argentines: economy chief Batakis in her own...