SEATTLE/CHICAGO (Reuters) -Boeing Co Chief Executive Dave Calhoun on Thursday said there could be “supply constraints” beginning in the summer after a “more robust” recovery than he expected from the aviation downturn during the pandemic.

Speaking at a Bernstein virtual conference, Calhoun also said he expects Boeing will be able to deliver the “lion’s share” of roughly 100 787 aircraft sitting in inventory due to production defects and weakened demand.

With U.S. leisure travel going “gangbusters” and carriers needing to rehire and rebuild their networks and supply chains, Calhoun pointed to likely “supply constraints for a while

“I think that will mean it’s a healthy recovery and they’ll get back to former pricing levels sooner rather than later,” Calhoun added.

Boeing is working to emerge from a safety scandal following two deadly crashes of its 737 MAX airliner and an air travel collapse during the pandemic.

It is also trying to decide the timing of its next new jet program, a multibillion-dollar dilemma that has sparked an internal debate and put the future of the largest U.S. exporter on the line, industry insiders say.

Calhoun said it would not be “all that long” before Boeing announces plans, but said the planemaker is not rushing the decision.

Regardless, Calhoun said efficiency gains on the aircraft would have to be found during design and assembly, as the next quantum leap in engine technology remains years away.

Separately Calhoun sounded notes of caution about the U.S.-China trade relationship, saying he could not predict when a “thaw out” would open up jet deliveries in one of the world’s fastest growing aviation markets.

On Thursday, Reuters reported that Qatar Airways was weighing a potential order for 30 or more freighters, attracting interest from Boeing, which has begun offering a freight version of its future 777X jetliner.

In April, the Gulf carrier said it was interested in a 777X freighter but had not been told by Boeing of plans to launch one.

On Thursday, Calhoun pushed back against uncertainty over demand and certification challenges for the 777X, saying there will “always be routes” for the mini-jumbo. But he added the Boeing board had not yet approved a freighter version. 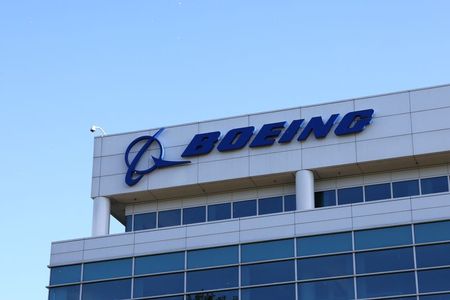 How the U.S. plans to starve Russia’s ‘war machine’ -Treasury’s Adeyemo to Reuters

Dutch agree to back Italian tax probe into Booking.com

Rouble leaps after Russia says some troops are returning to bases