MILAN (Reuters) -Last week’s Dutch court decision against Royal Dutch Shell is not the way to solve the global decarbonisation issue and risks shifting the problem to private firms, the head of the world’s largest money manager said on Thursday.

BlackRock CEO Larry Fink said the ruling that requires Shell to deepen its planned greenhouse gas emission cuts was an example of a general attitude that failed to address the overall problem.

The ruling, which could trigger legal action against other energy companies, is expected to force Shell to shed assets to comply.

Shell said it was disappointed with the ruling and planned to appeal.

“That (the ruling) doesn’t change the global footprint, that’s not a solution,” Fink told a conference on infrastructure investing.

Fink said governments were not doing enough to ensure a widespread push towards a carbon-neutral future, creating an incentive for companies to offload their hydrocarbon businesses and cause a “huge capital markets arbitrage”.

“What I worry about is that we’re going to put all pressure on public (listed) companies and very little pressure on the private side,” he said.

“If we are really sincere about the world having a net zero carbon (status) in 2050, we cannot move these parts of the economy out of public entities into private hands. The net zero world doesn’t change, but the company looks better.”

Fink said investors had to work with energy companies to support their green transition and that BlackRock was engaging with those in which it holds stakes.

“It’s not running away from the current hydrocarbon companies, it’s working with them as they navigate the move forward,” Fink said.

BlackRock is the top investor in BP and last week backed a shareholder resolution from activist group Follow This asking the energy group to set deeper climate targets.

It has voiced support for energy transition strategies at Total and Shell at recent AGMs. 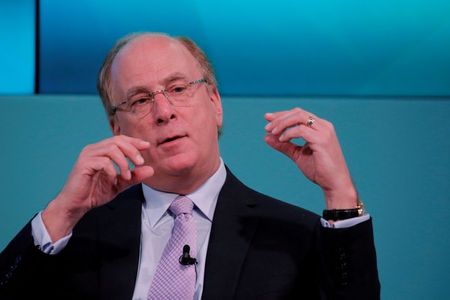