By Ankur Banerjee and Amruta Khandekar

(Reuters) – The U.S. Medicare program’s proposal to severely limit coverage of new Alzheimer’s treatments including Biogen’s Aduhelm threatens to hurt sales of the controversial drug and dim prospects for similar medicines in development by other companies.

In a draft decision on Tuesday, the Centers for Medicaid and Medicare Services (CMS), which runs the government health plan for people over age 65, said it would cover Aduhelm, and similar treatments, only for patients enrolled in approved clinical trials.

Shares of Biogen Inc were down more than 7% at $223.77 in afternoon trading, while shares of drugmakers developing similar treatments such as Eli Lilly and Co, Roche Holding AG and Eisai Co Ltd fell between 2% and 5%.

“It would appear that what is occurring is that cost is being put before the needs of Alzheimer’s patients,” Harry Johns, chief executive at the Alzheimer’s Association patient advocacy group, told Reuters.

He estimated that out of the one million or so Alzheimer’s patients who might now be eligible for Aduhelm, a few thousand at best could be enrolled in future CMS-approved trials, which will take years to conduct.

Aduhelm’s high price has raised concerns over the toll it might take on the Medicare program since Alzheimer’s is an age-related disease and around 85% of people who might use the drug are in the government plan.

Other health insurers have also questioned whether Aduhelm’s benefits are worth the cost.

“We agree with CMS there is a need to obtain more clinical data on efficacy, which will be essential to ensuring these new medications deliver real value to patients before broadening access,” Matt Eyles, president and CEO of trade group America’s Health Insurance Plans, said.

Sales so far have been weak and Biogen last month cut the medication’s list price by about half to $28,200 per year.

Biogen had been banking on the government’s coverage decision to help drive sales of Aduhelm, which was approved by the U.S. Food and Drug Administration in June, despite a vote by the agency’s outside advisers that the treatment’s clinical benefits had not been proven.

Only one of Biogen’s two pivotal trials showed Aduhelm can slow the rate of cognitive decline for Alzheimer’s patients.

Analysts said the decision, if left in place, could result in negligible Aduhelm sales in 2022 and 2023. The treatment brought in sales of $300,000 in the third quarter, compared with the average analyst estimate of $10.8 million.

“It is imperative to change this draft decision to be aligned with reimbursement for other therapies for progressive diseases, where patients have immediate and equal access to medicines approved by the FDA,” Biogen said in a statement.

Aduhelm, given as a monthly infusion, is a monoclonal antibody designed to remove a type of brain plaque associated with Alzheimer’s Disease. Patients need to be monitored for potential side effects including brain swelling.

The agency’s final coverage terms, due by April 12, are expected to apply to all drugs in the class.

Eli Lilly is conducting a head-to-head study comparing its experimental drug donanemab to Aduhelm and suggested it would not face similar restrictions if it demonstrates clear benefit.

“We expect that for drugs with established efficacy CMS will ensure access for all appropriate patients without creating further health inequities,” Lilly said in an emailed statement.

(Reporting by Ankur Banerjee and Amruta Khandekar in Bengaluru and Deena Beasley in Los Angeles; Editing by Shinjini Ganguli and Bill Berkrot) 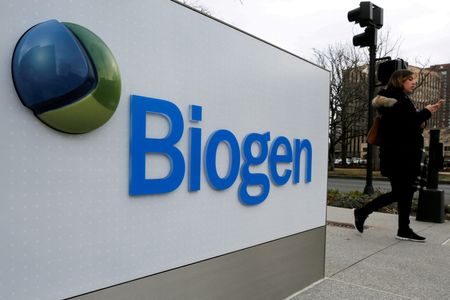